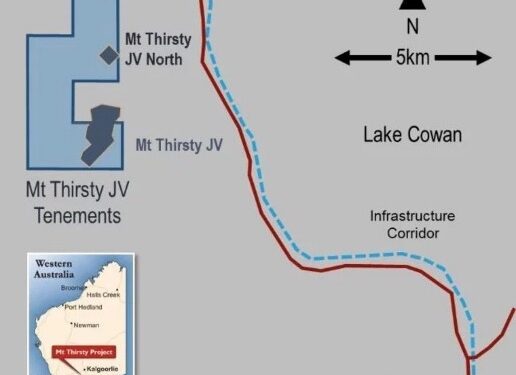 The current Phase I drill campaign was principally focussed on testing the deeper ultramafic sill horizons at Mt Thirsty, including any potential extensions to the recent palladium-platinum-gold-copper-nickel (PGE) Callisto discovery by Galileo Mining Ltd, located less than 200 metres from the MTJV’s northern tenement boundary.

Three distinct zones of horizontal mineralization have been intersected across the eastern licence area, namely:

The upper zone consists of a weathered ultramafic peridotite rock hosting Nickel-Cobalt-Manganese- Scandium mineralisation. Importantly, the most recent drilling has confirmed the presence of a lower, and potentially higher-grade, Ni-Co-Mn-Sc zone, which is currently outside of the existing resource and supported by historical drilling, most recent intercepts include:

The most recent drill campaign utilised a combination of both reverse circulation and diamond drilling methods which allowed holes to be extended to an average depth of ~350m below surface, significantly deeper than the air-core methods typically utilised at Mt Thirsty in the past.

As a result of this shallow air-core drilling, large areas beneath the existing resource still remain untested. Additionally, the current drill campaign employed a comprehensive multi-element assay suite, serving to identify the presence of scandium which had not previously been assayed for, and is not included within the existing resource estimate. The potential addition of scandium to the existing Co-Ni Mt Thirsty Project may provide a valuable by-product revenue stream.

Having intersected both the target horizon and anomalous PGE mineralisation in all holes for which results have been received, it is likely that secondary structural controls are influencing the spatial distribution of high-grade Callisto style mineralisation in the region.

Based on currently available information, it is believed that regional folding has created structural traps serving to create localised zones of sulphide accumulation. Initial results from the Phase 1 campaign have been instrumental in refining this exploration model, and have been utilised to further constrain the later phases of the Phase I drill campaign to areas which exhibit a similar structural signature as Callisto.

“These most recent results continue to highlight the prospectivity of the Mt Thirsty project and, importantly, the suite of target commodities, all of which serve to play a critical role in the continued decarbonisation of our economy,” Managing Director and CEO, Chris Hansen, said.

“Importantly, three discrete zones of horizontal mineralization have now been defined, with the confirmation of a lower, and potentially higher-grade Ni-Co-Mn-Sc zone outside of the existing resource, serving to potentially compliment a number of the other optimisation opportunities currently under consideration for the existing Mt Thirsty resource and PFS, including the use of high-pressure acid leaching, the addition of a cathode precursor plant and the recovery of other elements like manganese and scandium.

“While the Joint Venture has yet to intersect high-grade PGE mineralization, similar to the neighbouring Callisto deposit, having intercepted the target horizon and high anomalous PGE mineralisation in a number of holes we remain encouraged by these results. “Furthermore, as the exploration campaign has evolved over the past months, we have gained a much better understanding of the local controls on mineralisation, having more recently focussed our attention on potential structural traps serving to accumulate sulphides.

“Assays are still pending for 17, 4 and 5 holes for the upper, middle and lower zones respectively, and we look forward to keeping shareholders updated on a regular basis as our understanding of this geologic system continues to develop.”