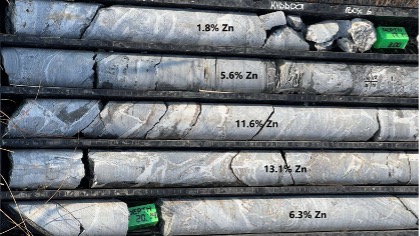 The company has now completed seven holes of a nine diamond drillhole programme targeting extensions and/or repeats at Khusib Springs.

The first deeper hole completed, KHDD006, tested for a repeat or offset of the Khusib Springs deposit at depth to the south of a potentially offsetting normal or wrench fault. The target zone lies below the brecciated T3 dolomite / T2 platy limestone contact at a depth of approximately 350m to 400m below surface.

The drillhole intersected the brecciated T3 dolomite with fine and/or blebby copper-sulphides (tennantite, chalcopyrite) and pyrite from 385m to 442m then a zone containing massive to semi-massive sulphide stringers and disseminated tennantite in the targeted platy-limestone from 442m to 481m (total 96m sulphide zone from 385m – see details and descriptions of mineralisation in KHDD007.

“The intersection of a 96m zone of copper-sulphide mineralisation in the first deeper hole at Khusib Springs is very encouraging,” CEO Jon Dugdale said.

“We are now completing DHEM and surface EM surveys to detect a repeat of the Khusib Springs massive-sulphide copper-silver orebody for further drill-testing.

“Discovery of extensions or a repeat of this very high-grade copper-silver deposit would be a game- changer for Golden Deeps and would provide a springboard to re-starting development from the existing Khusib Springs decline mine.”

The broadly copper-sulphide mineralised zone intersected in KHDD006 is approximately true-width and occurs across the brecciated T3 dolomite / T2 limestone contact, which is the same position as the Khusib Springs deposit, predominantly hosted within the T2 platy limestone below the contact.

A second deeper hole, KHDD007, drilled 30m to the southwest of KHDD006 intersected intermittently developed sulphide mineralisation from 374m to 535m downhole (161m) including zones of disseminated and/or euhedral crystals of tennantite and chalcopyrite across the T3 dolomite / T2 limestone brecciated contact at around 430m. The hole also intersected a lower zone of “well distributed” medium grained sphalerite (zinc sulphide) from 487m to 500m downhole.

Downhole electromagnetics (DHEM) is in progress for KHDD006 and KHDD007, to determine the extent of in-hole and/or off hole conductors in the vicinity of these holes.

Subject to the results of the DHEM and XRF results in KHDD007, a third deeper hole will be carried out to test for massive sulphides and/or extensions to the broad sulphide zone intersected in KHDD006.

Drillcore from KHDD006 is currently being sampled for analysis. Results will be reported when available.

The intersection in KHDD001 indicates that zinc mineralisation is developed on the periphery of the high- grade copper-silver zone at Khusib Springs. This zone remains open to the southwest at shallow depth and represents a zone of zinc-silver-copper resource potential for further shallow resource definition drilling.

At the same time as the new diamond drilling programme a large Moving Loop Electromagnetics (MLEM) survey has been carried out to the southwest of the Khusib Springs deposit.

Symons Geophysics in Namibia have conducted an initial programme of 25, 100m spaced lines of MLEM in three loops, covering a 2.5km corridor from Khusib Springs heading southwest to the tenement boundary.

The conductor is interpreted to be located below the T3 dolomite contact and may represent:

 Tennantite/Tetrahedrite copper-silver sulphide mineralisation. However, a more conductive body and a steeper dip or plunge would be expected if it is a massive sulphide, or alternatively,

 A low angled fault/ thrust or a conductor that is part of the stratigraphy such as a graphitic horizon. A second conductor has been detected further southwest on Loop 2 (currently being modelled).

A diamond drillhole (KHDD008) is in progress, testing the Loop 2 conductor across the T3 dolomite / T2 limestone contact and well into the footwall through the targeted Khusib Springs deposit position.

If sulphides are intersected by this drilling, associated with the conductor, then further drilling will be carried out at depth and the Loop 1 conductor will be tested.

“The intersection of sulphides associated with these conductors would be a significant breakthrough for the Company, as it would represent discovery of a new zone with potential to host a Khusib Springs copper-silver deposit repeat,” Mr Dugdale said.