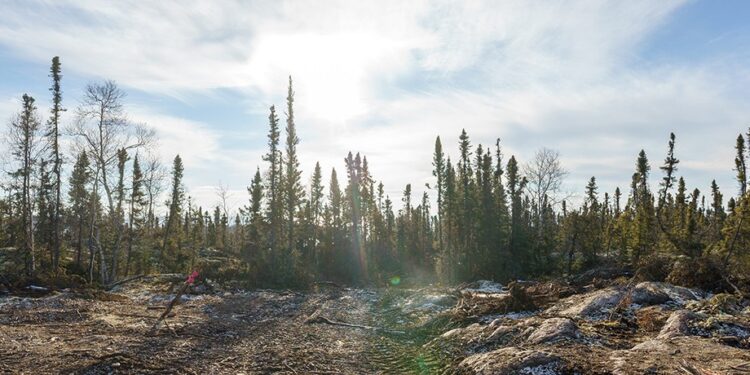 A total of nine drill holes were completed comprising 2,064 metres. Results included shallow intersections of elevated radioactivity, between 35 and 95 metres below surface, within favourable geological settings for high-grade, basement hosted deposits typical of the Athabasca Basin.

“We are very pleased with the initial results from the maiden exploration drilling programme at the Strike Uranium Project,” CEO, Dale Verran, said.

“This was the first drill programme aimed at testing the extensive electromagnetic conductors on the project at shallow depths, and the results have identified the key ingredients for high-grade, basement-hosted discoveries related to the Athabasca Basin.

“The intersection of elevated radioactivity and favourable alteration, associated with prospective graphitic structures, indicates the presence of a uranium mineralising system adjacent to the present-day edge of the Athabasca Basin.

“Our experienced technical team is particularly encouraged by the results from drill hole S22-013 which was highlighted by 1,800 cps within a graphitic fault with hydrothermal alteration, representing a priority area for follow-up along the K-conductor. Laboratory uranium assay and geochemical results, combined with structural analysis of drill core and detailed surface mapping, will be utilised to plan a follow-up programme.

“Exploration drilling has now commenced at the Murmac Uranium Project where the Company plans to test a compelling set of eight to ten targets identified from electromagnetic and gravity surveying in proximity to numerous radioactive and uranium surface showings and/or favourable structural features. We are looking forward to the continued drilling results from our Strike and Murmac Uranium Projects.”

Drill Programme Summary
A total of nine drill holes (2,064 metres) were completed during the period May 21 to June 15, 2022. Holes were drilled to test the targets which were refined following completion of ground gravity surveying in May.