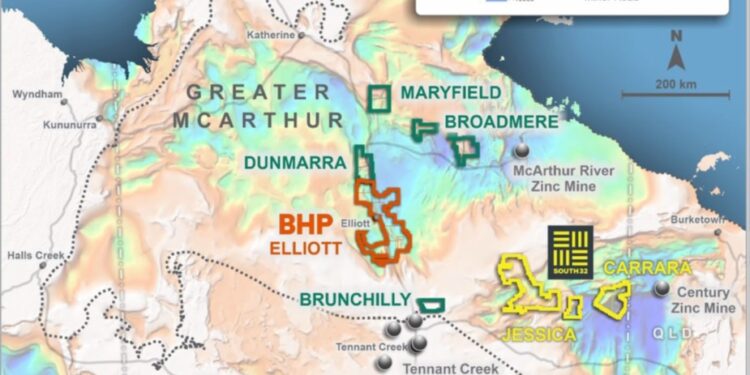 Encounter Resources Ltd (ASX:ENR) has confirmed that the junior explorer and a wholly owned subsidiary of South32 Ltd have entered into Farm-in and Joint Venture Agreements covering the Carrara Copper-Zinc Project and the Jessica Copper Project in the Northern Territory.

“The Greater McArthur Superbasin in the NT is fast emerging as one of the most significant global opportunities for the discovery of new, large sediment-hosted copper and zinc deposits under shallow cover,” Managing Director, Will Robinson, said.

“Encounter is advancing this vast opportunity via a combination of farm-in agreements with some of Australia’s largest mining companies (South32 and BHP) and an extensive portfolio of 100% owned projects. Identifying opportunities, completing early stage exploration and then accelerating work through partnerships is one of the company’s stated objectives.

“To date Encounter has completed farm-in agreements in the NT that can provide up to A$50 million in initial exploration funding from its partners.

“The search for Tier-1 copper and zinc deposits in the NT continues to gather pace and we are delighted to be working with high quality partners with accomplished exploration teams to capture this huge opportunity.”

Access to the project is via the sealed Tablelands Highway that traverses the western side of Jessica.

Jessica captures compelling structural targets along the Brunette Downs Rift Corridor that was identified in the Geoscience Australia Exploring for the Future Programme. Jessica was targeted along the northern flanks of the East Tennant gravity ridge and the intersection with a major NNW structural corridor.

Jessica has potential for both basement IOCG style mineralisation and sediment-hosted copper deposits. Systematic assessment of drill chips from water bores at Jessica has been conducted by Encounter and a previous explorer utilising handheld XRF machines.

Areas of copper anomalism were selected for chemical analysis and for the sample interval 0-3m in RN28419 (No. 39 water bore) which returned 1.5% copper.

Carrara, which involves licences EL32476, EL32477, EL32701 and EL32813, was secured following the release of the South Nicholson Seismic Survey, a foundational dataset acquired as part of the Geoscience Australia Exploring for the Future Programme.

A key finding of this study is the correlation of prospective stratigraphic units from the Isa Superbasin into the Carrara Sub-basin that extend the Mount Isa Province to the west. Carrara is located at an interpreted structural offset of the western margin of the Carrara Sub-basin where the prospective Isa Superbasin units are modelled closer to surface.

The giant Century Zinc Mine is located on the eastern margin of the Carrara Sub-basin, and there is a clear correlation of the Century mine stratigraphy across the basin in GA seismic data.

Late in 2020 a 1,751m deep stratigraphic drill hole (NDI Carrara-1) was completed as part of the National Drilling Initiative funded by the Minex CRC. This hole was designed to validate the interpretation of the South Nicholson Seismic Survey and was located within the Carrara tenement.

The results of the NDI Carrara-1 stratigraphic drill hole supports the interpretation that the geology of the Isa Superbasin extends throughout the Carrara Sub-basin. The presence of copper and zinc sulphide mineralisation demonstrates that sediment hosted copper and zinc mineralising processes occur within the prospective host unit.