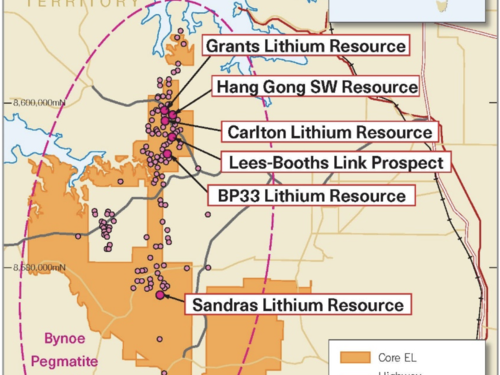 The two diamond holes were drilled to collect samples for variability metallurgical testwork and a small programme of reverse circulation (RC) drilling to test for a southern extension to the pegmatite hosting mineralisation at BP33.

The two deep diamond drill holes were completed at BP33 along strike to the north and south to test for the continuity of the pegmatite and mineralisation at depth.

Core management said these high-quality intersections support the current interpretation that the BP33 mineralisation is improving with depth.

The continuity in grade and thickness displayed, together with the position of the intersections outside or on the boundary of the current Mineral Resource envelope, is expected to result in an increase in the Mineral Resource estimate for BP33.

BP33 Southern Extension Drilling A total of 7 RC holes and two diamond holes were drilled during the 2021 field season to test for southern extensions to the BP33 mineralised system.

The drilling has confirmed that a spodumene bearing pegmatite extends to the south and beyond the limits of the current Mineral Resource estimate.

The southern BP33 pegmatite dips steeply to the east and strikes in a north south direction. This is a different trend compared to the main BP33 pegmatite and it is uncertain at this stage how the two bodies are related. Although spodumene has been identified, the southern pegmatite is not as strongly mineralised as the main body.

The true thickness of the body varies between four to 10m but does appear to be increasing in thickness with depth. Further drilling is planned for the coming field season to evaluate the distribution as well as the grade continuity of this southern pegmatite at BP33.

Given the proximity to the main high grade BP33 mineralisation, even a pegmatite with modest grade and tonnes could have a significant positive impact on the Mineral Resource estimate.

Both holes were drilled into well understood areas of the mineralisation and as such intersections were in line with expectations. Intersections for each hole are:

Additional drill assay results from the 2021 drilling campaigns at the Finniss Project are expected to be reported over coming weeks as substantial delays in laboratory productivity are resolved.

“Our prime directive is to deliver first production of high-quality lithium concentrate from the Finniss Project this year in the midst of a very high lithium price and high operating margin environment.

“These new world-class lithium drilling results reflect the confidence Core has in delivering significant resource growth from the Finniss Project that will add to our life of mine and our capacity to materially increase lithium production from northern Australia in the future to keep up with rapidly growing global demand,” he said.