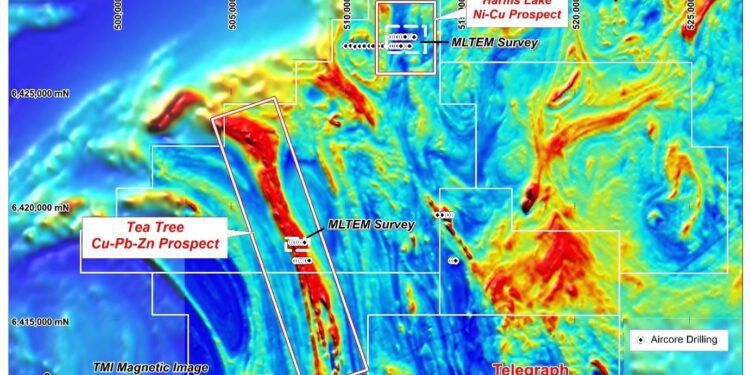 The Balladonia Project is subject to the Strategic Alliance Agreement (SAA) with a wholly-owned subsidiary of South32.

The new targets, at the Tea Tree and Harms Lake prospects, will be included in the upcoming diamond drill program which is partly funded by the Government’s Exploration Incentive Scheme (EIS), as advised in October 2021. As a result, the upcoming programme, which is expected to commence in March, has been increased to six holes for a total of ~1,400m.

Five lines (60 readings) of MLTEM were completed along lines 200m apart with stations every 100 metre along each grid line, using 200m x 200m transmitter loops and an offset receiving sensor (B-field Squid).  A shallow (<50m) strong conductor (~4,000 siemens), approximately 120m x 120m in size, was located along the northernmost grid line, suggesting the presence of a possible sulphide source close to the contact of the interpreted intrusion.

Weaker conductive responses over the centre of the intrusion are thought to reflect deeper weathering, with the possibility of disseminated to matrix sulphides associated with the more ultramafic portion of the intrusion.

At the Tea Tree Cu-Au prospect, a single line of MLTEM was completed along the drill section planned to test coincident magnetic and gravity anomalies that are thought to reflect possible mineralised BIF stratigraphy similar to that found in the Eastern Succession of northwest Queensland (Mt Isa Region), where a number of base metal deposits occur.

The MLTEM survey identified a strong conductor (~8,000 siemens) at a depth of ~100m located towards the western end of the survey line, suggesting a possible sulphide and/or graphitic source at the margin of the inferred BIF stratigraphy/

While this EM target has not been fully defined, additional drilling to test this target has been included within the planned drill programme – which is designed to test the base metal potential of the inferred BIF sequence.

AusQuest’s Managing Director, Graeme Drew, said the identification of additional priority drill targets was an exciting new development for the Balladonia Project ahead of the upcoming diamond drill program.

“The identification of strong conductors at two key prospects adds further momentum to the upcoming drilling program. We are very much looking forward to drilling getting underway in March, so we can test these and other targets within the Balladonia area and hopefully start to unlock the base metal potential of this region,” he said.