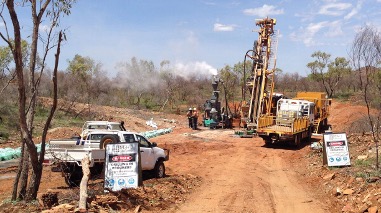 The company’s total MRE now stands at 19.7 million tonnes (Mt) after a further 10.8Mt were added to the company’s existing 8.9Mt resources at the Sandiego and Onedin deposits to the east.

“We knew that the copper mineralization at Emull had the potential to offer significant additional tonnes to the Koongie Park resource base, Mr Williams said.

“Emull’s resource tonnes are complementary to Sandiego and Onedin deposits which together provide strong mining development options for Koongie Park.”

Emull’s MRE has been classified as an Indicated and Inferred resource and was based upon 99 drill holes totalling 11,051m, comprising 88 historic reverse circulation (RC) drill holes by Northern Star Resources between 2003 and 2012 for 9,141m, and 11 RC holes by AuKing during 2022 for 1,910m. Follow-up extensional resource drilling both to the north-west and the south-west will be a key feature of proposed drilling in early 2023 and support an upgrading of the resource classification.

The Emull deposit extends to a depth of 280 vertical metres and is currently modelled with a strike length of approximately 600m, with mineralization still open at depth and along strike to the north- west. The Emull Mineral Resource is reported at a 0.25% copper equivalent grade and summarised below.

The licence forms part of the existing Koongie Park Joint Venture between AuKing and Astral Resources NL, of which AuKing owns an 80% interest.

Since the early 1970’s, several companies have explored within the Emull tenement area, primarily focusing on the potential for a significant stratabound lead-zinc system with volcanogenic affinities. North Star Resources commenced exploration work in the area in E80/2612 in 2003-2004 for a number of target styles including polymetallic mineralization as seen at Emull, Au mineralization as identified at the nearby Nicholson’s gold mine and possible PGM mineralization.

North Star undertook extensive drilling in the area with Emull being a strategic focus and concluded exploration activities in the area in 2012 following their Paulsens gold acquisition.