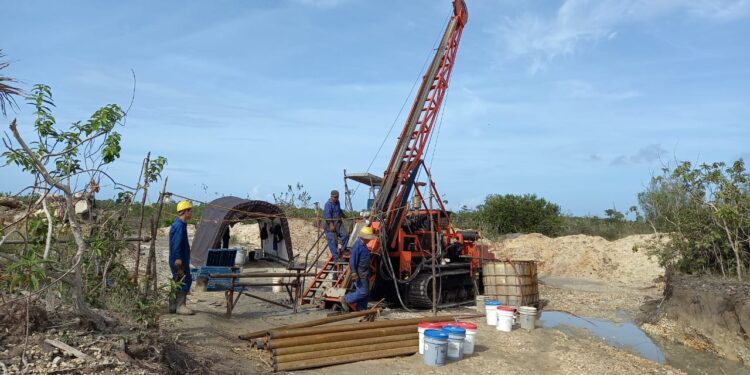 Antilles Gold Limited (ASX: AAU) has confirmed that its joint venture with the Cuban Government’s mining company, GeoMinera SA, will be on the development of two mid- sized mining projects, and the exploration of a major copper-gold porphyry system.

* Construction of the proposed La Demajagua open-pit mine is planned to commence around April 2023 and produce two concentrate products following commissioning in late 2024, one being gold-rich, and the other silver-rich with high levels of valuable antimony.

– Antimony is a strategic critical metal used in munitions, and the manufacture of batteries and semi-conductors, and is in increasing demand with its price doubling over the past two years.

– The addition of antimony to the La Demajagua project revenue will impact positively on the project profitability and enhance financing options.

* A 7,000m drilling programme of the outcropping El Pilar gold-copper oxide deposit is planned to commence in January 2023, in anticipation of construction of a shallow, low cap-ex open-pit mine between Q2 2024 and Q2 2025, to produce copper and gold concentrates.

* An airborne geophysical survey will be conducted over the 40km long New Horizons VMS style polymetallic mineral belt in central Cuba in Q3 2023.

* Antilles Gold is focused on mineral-rich Cuba which has been extensively explored by Canadian, Russian, and Cuban mining companies, but where development opportunities have been overlooked for decades.

* The only recent development has been the US$300 million Castellanos base metals mine which was commissioned in 2017-18 by the EMINCAR joint venture between Trafigura and GeoMinera.

* Cuba is a mining-friendly jurisdiction with attractive foreign investment laws, and realistic mining and environmental regulations.

* The company spent over two years (2018-2020) negotiating a 49:51 joint venture with GeoMinera after being invited to participate in the development of the Country’s largest known gold-silver deposit at La Demajagua.

* The 49:51 relationship reflects ownership of the joint venture company, Minera La Victoria (MLV), but not control of Board, or Shareholder Meetings, where voting is equal for both participants.

* Since early 2021, under the direction of Antilles Gold, MLV has been advancing the pre- development activities for the proposed La Demajagua open pit mine which, based on geological modelling and metallurgical test work, is currently planned to produce approximately 65,000 tpa of concentrate containing gold, silver, and antinomy, for around seven years, and be followed by underground operations for 10 years.

* In late 2021, GeoMinera agreed that it would work with Antilles Gold to progressively establish a mining company in Cuba focussed on the production of copper and zinc as well as precious metals, rather than developing a single project at La Demajagua.

* Antilles Gold was subsequently offered over 30 previously explored concessions and properties to review from which three were selected, and two were incorporated in a formal Exploration Agreement with GeoMinera.

– the 31,700ha 40km long New Horizons VMS style polymetallic mineral belt in central Cuba that includes four copper-zinc mines (Antonio, Santa Rosa, San Fernando, and Los Cerros) that were operated by a Soviet mining company until abandoned in the exodus from Cuba in 1991, and 16 identified targets with outcropping mineralisation.

* The third property, a major VMS polymetallic mineral field in south-east Cuba, is also expected to be included in the Exploration Agreement.

* The Exploration Agreement permits Antilles Gold to review, at its cost, the potential of various deposits through preliminary exploration, metallurgical test work, and financial analysis before nominating which properties should be transferred to a joint venture for potential development.

* The Company will be reimbursed the cost of its review by the joint venture that is established to undertake the development of the nominated project.

* It is expected that the development of smaller projects such as the proposed gold-copper mine on the El Pilar oxide deposit, and the potential re-opening of copper-zinc mines within the New Horizons polymetallic mineral belt, will be undertaken in the existing joint venture which was established for the development of the La Demajagua gold-silver deposit.

* Any large prospective developments will be incorporated in separate joint venture companies where all or part of Antilles Gold’s shareholding may ultimately attract a major mining company interested in progressing a substantial mining project.

In Q4 2023, an airborne geophysical survey will be conducted over the New Horizons VMS polymetallic mineral belt in central Cuba, and a review of this data and results from 68,000m of historic drilling will determine the exploration program to be conducted on any identified VMS structures in 2024.

* To fund the preliminary exploration programs, and project evaluations in 2023- 2024, the Company aims to conclude negotiations in early 2023 with one of several parties showing interest in taking up a substantial strategic shareholding in Antilles Gold through a share placement, which should be undertaken at a premium to the then prevailing market.

* From early 2025, exploration could be met by cash flow from within the joint venture company, following commissioning of the La Demajagua open-pit mine.