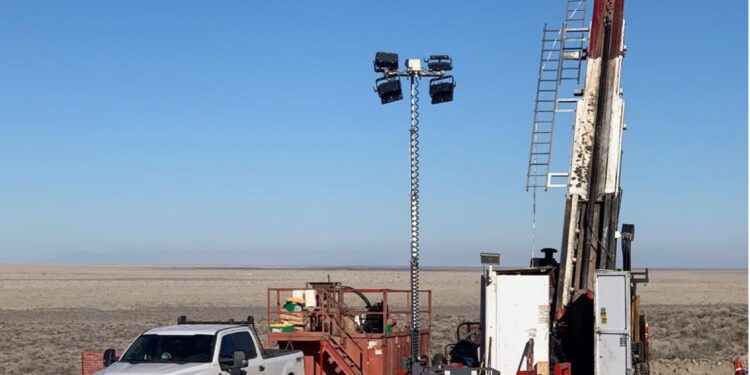 Drill hole WD22-02 was designed for metallurgical testing of the near surface ore lenses and was drilled to a downhole depth of 233.8m.

The mineralisation is variably weathered and consists of oxide and transitional classified ores.

Managing Director, Dave O’Neill, said the drill hole confirms the continuity near surface of the Main Zone of the West Desert Deposit and is supportive of the potential for an open pit development scenario.

Historical metallurgical test work on the oxidised zinc and copper mineralisation has produced highly encouraging results with traditional processing methods and with high recoveries of zinc, copper and indium from this near surface mineralisation.

“We are very pleased to receive strong assay results for WD22-02, and these will used to support the metallurgical programme,” Mr O’Neill said.

“The drill hole has intersected thick zinc, copper and indium mineralisation near surface. The interval is particularly enriched in Indium, a critical metal and important credit within our zinc concentrate, with grades up to 237g/t In.

“The drill hole confirms the upper extensions of very thick mineralisation encountered in the first two drill holes completed by American West and highlights the potential for an open pit operation.

“We are looking forward to reporting on the results for the remaining drill holes in the coming weeks.”

WD22-02 was the third drill hole of American West’s initial drill programme and was targeting ore grade material in the near surface oxide and transitional zones for metallurgical test work.

“This area of the orebody contains extensive shallow mineralisation which could support open pit development. Assays for the drill hole were brought forward in the laboratory queue to allow samples to be selected for important metallurgical test work.

WD22-02 was drilled to a downhole depth of 233.8m and encountered a number of zones of mineralisation.

The major mineralised interval in WD22-02 is approximately 36m thick and consists of strongly to moderately oxidised massive gossan. The gossan shows relic textures after sulphide and contains visual zinc and copper oxides, which is typical from weathering of strong skarn style mineralisation. Significant sulphur is noted in the assays which suggests that the material is not fully oxidised.

A lower broad zone of intermittent (and sub-grade) mineralisation from approximately 134m consists of very thin sphalerite veinlets within monzonite porphyry and massive dolomite, and contains a number of higher-grade fault hosted bands of zinc and copper mineralisation.