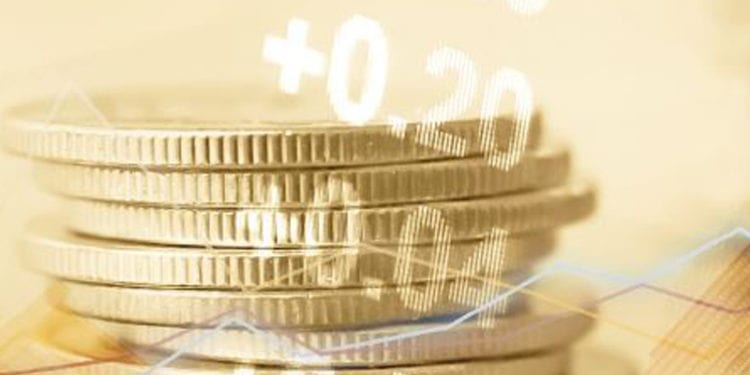 The macro environment is evolving in gold’s favour. While a confluence of key factors driving gold prices look set to become more supportive, pinpointing when these drivers turn positive, and if they turn collectively, is more uncertain.

Scaling back of Fed rate hike expectations, a weaker USD and lower US Treasury yields paint a favourable backdrop for gold prices; in turn, gold price risks are skewed to the upside in 2019. Prices fell in 2018, amid dollar strength, the Fed tightening rates, and escalating trade tensions. These macro factors proved to be stubborn headwinds that capped gold’s upside momentum, but are set to ease this year or even become tailwinds. It also bodes well that gold has reasserted its safe-haven status in the past weeks amid a weaker equity market and easing trade tensions, and a number of risks such as Brexit linger that could expose prices to the upside. On the downside, despite a weaker-than-expected physical market, gold prices have found support from central bank buying and sizeable ETP buyers. The key factors to watch for 2019 are (1) the Fed rate hike trajectory, (2) currency movements – particularly the USD, (3) US Treasury yields, (4) central bank buying and (5) investor appetite. Sentiment is key for gold, and it looks to be turning positive, in our view.

Market scales back Fed rate hike expectations
Gold prices have come under pressure ahead of each rate hike since the Fed started its current hiking cycle in December 2015, and rising rate hike expectations have capped gold’s upside as the opportunity cost of holding gold has risen. Although gold has been known to outperform during periods of rising rates, this has primarily occurred when other fundamental drivers have dominated. Last year, however, we believe this was one of the gold’s most stubborn obstacles, hindering gold’s ability to breach $1,350/oz on a meaningful basis. 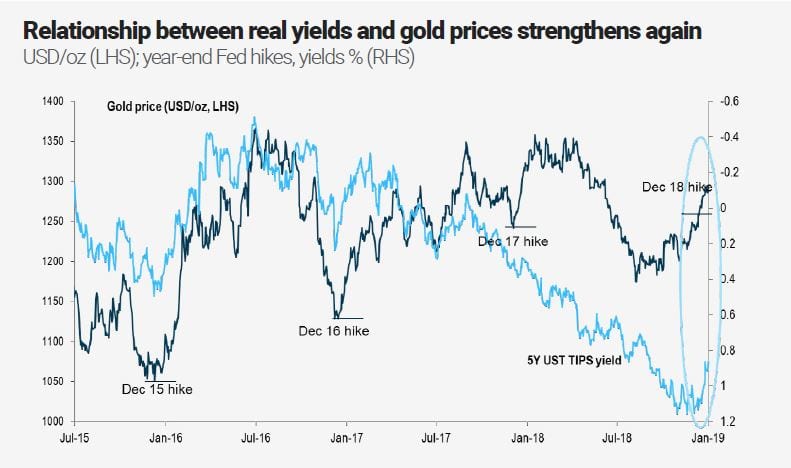 In late Q3-2018, some market participants were expecting four 25bps Fed hikes in 2019. Optimism about the US economy appears to have peaked in October, when the US rates market was expecting 60bps of rate hikes in 2019. However, market expectations have been sharply curtailed since the December FOMC meeting; the Fed’s median dot plot now shows just two hikes for 2019, while the Fed funds futures curve implies a low probability of one hike. Our US economists expect two 25bps Fed hikes in 2019, in September and December. A more dovish FOMC could portend firmer gold prices, as does the market starting to price in the end of the current hiking
cycle.

Lower yields and a weaker dollar bode well for gold
It is not our base case that the US will suffer from a recession in 2019, nor do we expect the Fed to cut rates this year, but markets are starting to anticipate the end of the hiking cycle. There has been much discussion on whether an inverted US yield curve is a precursor for recession. While gold has broadly tended to outperform during periods of negative growth, our base-case scenario is that we are unlikely to see a recession in 2019 in the US. We forecast US GDP growth to slow to 2.6% in 2019 and that US inflation will not rise much above 2%.

Our rates strategists note that the US Treasury (UST) market entered 2019 amid the safe-haven bid that began in Q4-2018. Initially, when the S&P500 rebounded, 10Y UST yields fell further, which suggested that global growth concerns and the resulting equity-market volatility continued to support a flight to quality. Risks from current yield levels appear roughly balanced, although we see scope for further downside if there is a continued deterioration in risk sentiment. The correlation between gold and US Treasuries has strengthened again, with the three-month rolling correlation rising above 40%, having broken down a year ago. We expect 10Y yields to end Q1-2019 at 2.50% and to close 2019 at 2.75%, which could support gold. 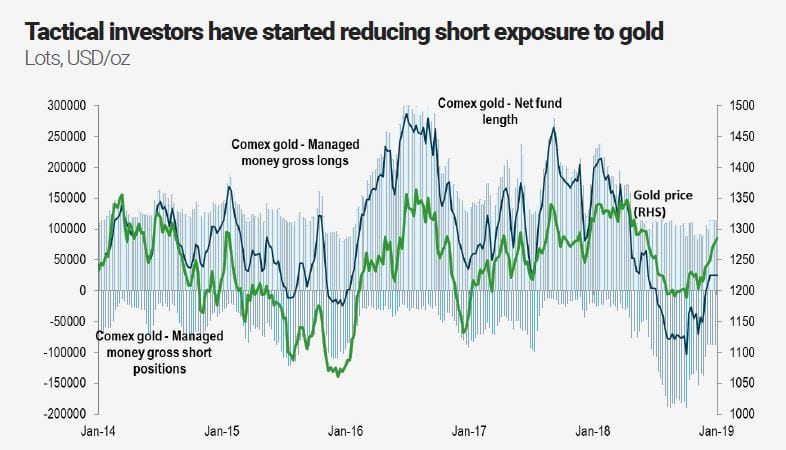 One correlation that has remained steady is gold’s three-month rolling correlation with the USD, a relationship that we expect to remain intact in 2019. Indeed, dollar strength weighed on gold prices last year, but our FX strategists expect the USD to surrender these gains in 2019. We believe that the USD is overvalued and is in the process of putting in a medium-term top, and that US growth momentum is expected to fade. Optimism about US assets and the economic outlook is subsiding from peak levels. Our FX strategist expect EUR-USD to weaken modestly, trading towards 1.20 by year-end.

A weaker USD is constructive for gold, given it had been the main drag on prices for much of 2018. The USD rather than gold benefited from escalating trade tensions; as tensions have eased, gold has gained upward momentum. Our FX strategists now expect the USD-CNY to stay below 7.0 throughout 2019, removing another downside risk to gold. The strong correlation between gold prices and the Chinese yuan (CNY) had previously suggested that gold could dip below USD 1,200/oz for longer, had the CNY traded above 7.0 for a prolonged period. Further, our Rates strategists believe that US Treasury yields have peaked.

Official-sector buying is the strongest since 2015
The most significant shift in gold market dynamics has stemmed from a factor that contributes to broader sentiment and fundamentals, rather than drives price rallies. Official-sector purchases are set to mark the strongest year in three years, buoyed by new market entrants such as Hungary, Poland and India, as well as established buyers such as Russia, Kazakhstan and Turkey. 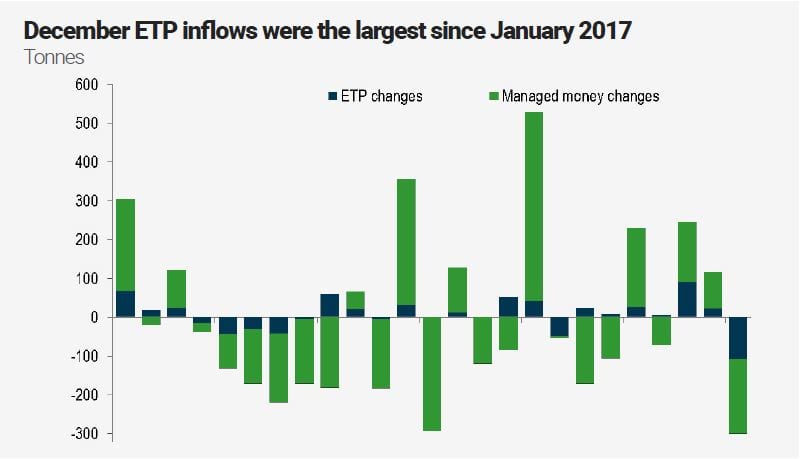 Hungary’s central bank announced it had increased its gold reserves for the first time since 1986, from 3.1t to 31.5t in October 2018. It said that gold is “one of the safest assets”, and can provide stability amid “structural changes in the international financial system or in deeper geopolitical crises”. Most recently, the People’s Bank of China reported a 9.95 tonne increase in gold reserves in December 2018, following more than two years of unchanged holdings. China last reported an increase in October 2016 of 4t. The recent increase takes its holdings to 1,853t, and is larger than the monthly average purchases seen in 2016 of just under 7t. Although the addition could be a one-off, other central banks that have re-entered the market have made regular purchases.

Central banks have remained net buyers of gold despite USD strength, EM
currency weakness and subdued gold prices. Indeed, with the latest available data, we estimate official-sector buying of just under 500t for 2018, the highest since 2015. Such buying is likely to limit downside risk for prices.

Is gold back on investors’ radar?
Although we expect mine-supply growth to slow, recycling to edge marginally higher and jewellery demand to stabilise at lower levels in 2019, investor demand is key. Gold needs broad-based investor demand to outperform which includes tactical and ETP investors as well as retail investor demand. We believe the chief culprit behind gold’s inability to trade meaningfully above $1,350/oz over the past couple of years was the absence of retail investors. Retail demand in the US has more than halved over the past decade.

Lacklustre retail demand is not a global trend. Over the past 10 years, retail investment demand has grown by more than one-third in Asia, led by more than a trebling of demand in China, and has been broadly stable in Europe. Nevertheless, although US gold retail demand makes up a small share of global demand, it is indicative of market sentiment.

US gold coin sales fell by two-thirds in 2017 to their lowest levels in 10 years, and were down a further 1% in 2018. Speculative positioning in gold swung into net short territory and fell to its lowest position since 2001 last year. Physically backed gold ETP holdings are around one-fifth below their peak reached at the end of 2012. 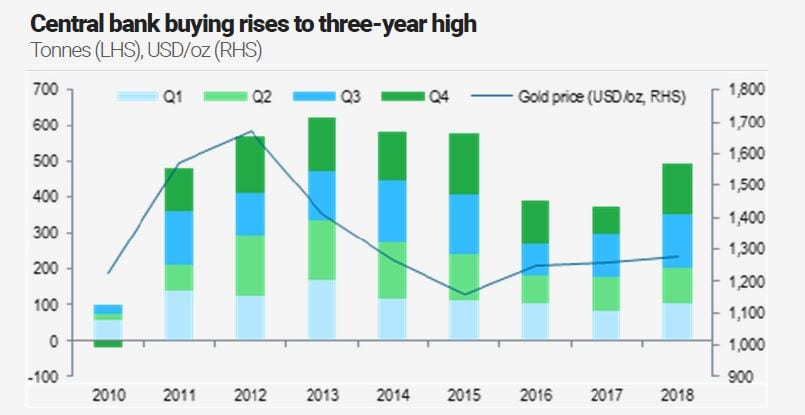 However, sentiment and demand appear to be shifting more favourably towards gold. Inflows into physically backed ETPs were the highest since January 2017 in December, reaching 67 tonnes. December also recorded the strongest daily inflows since July 2016. This trend has continued into January with inflows already reaching 28 tonnes in two weeks.

Annual gold ETP flows swung to net inflows in Q4-2018, which at over 100 tonnes was the strongest quarter since Q1- 2017. This is key given gold ETP investors tend to manage loss-making exposure on a timely basis, but last year, despite loss-making holdings, gold ETP investors retained their gold exposure taking a longer term positive view on the metal. On a shorter-term basis, speculative interest data also suggests that investors are not only covering short positions, but have also started to add to gross long exposure in January. Gold tends to outperform when it garners support from broad-based investment demand. The broader investment picture had wilted in 2018, with US retail investment taking a backseat, but even coin sales have started to recover. US Mint gold coin sales have had a strong start to the year (although partly driven by annual restocking).

We expect gold prices to average USD 1,305/oz in 2019. Prices have found downside support from fundamentals, even if this does not stem from the traditional source of the physical market, with growing central bank buying and resilient ETP investors. While the macro backdrop is set to unfold more favourably, with investors starting the reassess gold’s prospects as the market scales back Fed rate hiking expectations.