By Valentina Ruiz Leotaud from MINING.com 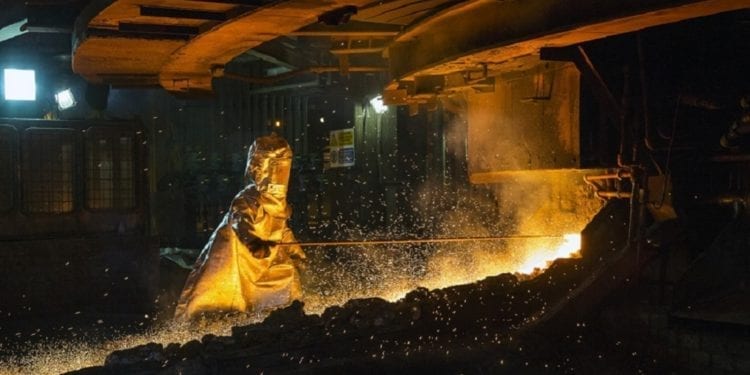 A new report released by BMI Research states that global nickel ore production growth will continue to accelerate in 2018 as major producer countries see a recovery in production levels following subdued output in 2017.

“We forecast world nickel production to grow by an annual average rate of 3.5% over 2018-2027, slightly slower than the 3.5% average rates achieved during 2008-2017, which were boosted by higher nickel prices experienced before the commodities slump and Indonesian growth before the export ban in 2014,” the report reads.

According to BMI, by 2027 global annual nickel production should reach 2.9mnt. In the firm’s view, Indonesia would continue to lead the way after having surpassed the Philippines as the largest global producer in 2017. The transcontinental country will also be the best performing one in terms of nickel production growth during 2018-2027 thanks in part to the moderation of its export ban.

“The country’s sector received a boost in 2017 following the decision in January of that year by the government to allow the export of unprocessed ore, under certain conditions. We expect production growth in Indonesia to remain sustained in 2018 as the nickel mining industry continues to recover. As such, we forecast output in the country to reach 480kt in 2018 up from 400kt in 2017, a 20% y-o-y rise,” the study states.

Throughout the period 2018-2027, BMI sees Indonesia’s nickel industry growing production by 8.1%, in part benefiting from stricter environmental regulations in its biggest regional competitor, the Philippines. This development would increase the rate at which Indonesia regains part of the Chinese market share it had previously lost to its neighbour.

A downside to such positive outlook is the fact that the country could start relying too much on production while reducing investment into its growing smelting sector, which refines the mined nickel ore.

The Philippines, on the other hand, would see a dimmer future, says BMI. “Nickel mining production is expected to remain subdued in 2018 as policy uncertainty continues to plague the sector following last year’s decision to ban open-pit mining by ex-environmental secretary Regina López,” the report states.

Soon after López had been appointed in June 2016, she carried out a series of environmental audits that led to the closure of some of the country’s 41 nickel mines. The decision led to a decline in nickel production by 34% y-o-y in 2017 as mining operations were shut down.

As López was replaced by a more moderate politician, BMI expects some form of relaxation of the current ban to take place this year. “We forecast Philippine nickel production growth to average 1% y-o-y in 2018. The Philippines will maintain a steady average production growth rate of 1.8% over 2018-2027 as output gradually recovers from the decline of 2017, maintaining the country’s current position as the second largest nickel producer. However, the country’s global market share will decrease from 10.5% in 2018 to 9.2% in 2027.”

Similarly, Russian nickel production does not show a positive performance in the midterm because, according to BMI, just a few projects would come online. “We expect Russia to drop on the list of major nickel producers, from second in 2017 to fourth in 2021,” the document states. “The country will contribute 7.1% of global production in 2027, down from 8.2% in 2018.”

Canada is also expected to show a decline in its global contribution during the same time period. “We forecast the country’s production growth rate to average 1.6% over 2018-2027, the slowest of all major global nickel producers.”

The analysis presents Australia, which enjoys a stable regulatory environment and a solid project pipeline, as the second best-performing major producer. 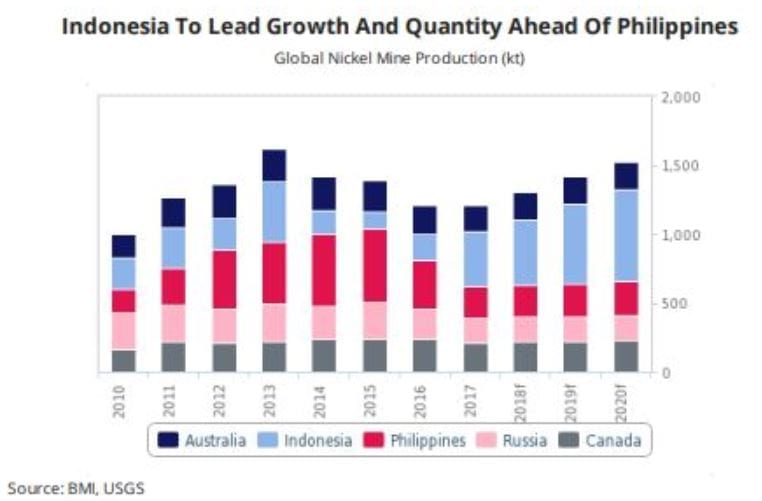