At the start of April, Core Consultants released the first of a new series of research bulletins aimed at offering accessible yet authoritative coverage of areas of increasing interest, starting with the recent vanadium pentoxide rally. We include a large section of our analysis here for readers of The Assay.

Last year, vanadium outperformed many battery metals including cobalt and lithium to gain 130%. Chinese vanadium pentoxide increased from $9/lb at the start of December 2017 to $13/lb at the end of January, but the third week of March registered a whopping $15.5/lb for 98% min vanadium pentoxide.

The question as to whether market participants have placed undue emphasis on these changes needs to be understood through careful analysis of the market fundamentals of the commodity in question.

Considering vanadium for steel use, growth in crude steel production was 3.6% CAGR over the last ten years, compared to the growth in intensity of vanadium use at 8% CAGR. Vanadium’s intensity growth has significantly outpaced steel growth, placing pressure on vanadium demand and prices. For metals used in steel, it is common for a new rebar standard or a change in market pace to affect the commodity’s value.

In December 2010, China imposed new design codes for construction steel. This came in response to the 2008 Sichuan earthquake which took the lives of around 68,000 people due to disintegrating and falling floor systems in brick and concrete structures. These new codes took effect in 2011, with the aim of gradually eliminating the use of (grade II) lower strength bars.

Chinese authorities clamped down further in 2013 by imposing more stringencies on those producers who did not meet the rebar standards, resulting in sustained declining inventory levels. This caused vanadium prices to eventually surge in 2017, fueled further by supply constraints in South Africa and China and overall lower contracted vanadium volumes. 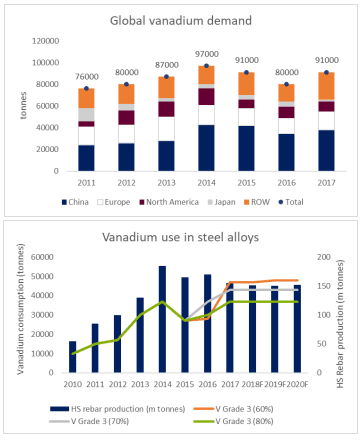 In February 2018, the Standardization Administration of China (SAC) announced further rebar regulations and simultaneously introduced more stringencies aimed at clamping down on subpar steels in the country. These standards are expected in come into full force in November this year and prices have already rallied to levels not seen since November 2008.

We expect that the new steel regulations introduced in 2018 will again provide a significant improvement in vanadium specific consumption rates. Furthermore, according to the China Iron and Steel Research institute (CISRI), these new rebar standards should see China’s vanadium metal consumption increase by 30% over 2016 for the next two years.

From the supply side, major projects have been taken offline, particularly in South Africa. Pollution control measures in China have ensured that a number of iron ore producers have had to curb production, and at the same time, poor iron ore prices have stifled the ability of Chinese magnetite producers to ramp up production. Additionally, China is mining more and more iron from hematite ores, and we expect this to decrease the country’s vanadium output.

Considering potential demand drivers, on the upper end of analyst forecasts, Vanadium Redox Batteries (VRBs) are expected to capture as much as 15-20% of the energy storage market. The reason for this bullish sentiment is that if one compares VRB’s to lithium ion batteries, VRB’s already demonstrate the lowest costs in the industry for grid/energy applications.

To date, mass adoption has not yet taken off due to the relatively high capital requirements to manufacture this type of battery. Furthermore, they remain unsuitable for portable applications and so are constrained to industrial usage in wind turbines or power stations. However, there is the potential for gains from vanadium flow batteries, playing into renewable energy trends, which dominate global macroeconomic investment today.

We note scope for VRBs in large-scale and/or particularly remote energy storage, such as in agricultural industries. In our opinion, the vanadium market is facing a perfect storm scenario this year greater than the one in 2015. To access the full report, click here.