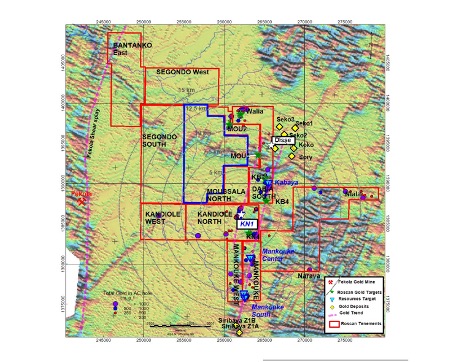 In Kandiole KN1, the continuity of the mineralised gold envelope has been demonstrated and expended laterally with a number of holes intersecting gold mineralisation. In addition, high grade with visible gold (VG) was encountered in the fresh rock.

The Reverse Circulation (RC) and core holes (DD) drilling programmes have improved and expanded the knowledge of the geometry of the gold-bearing zones.

At Kandiole KN1, the gold mineralisation envelope has been extended 125 m depth beyond the current pit limit of 150 m depth with more consistent gold intercepts from these additional holes. The mineralisation remains open to the North and South and to the East directions.

At Disse, the high-grade gold extension continues to grow with high-grade intervals in the fresh rock along several distinct mineralized lodes. From the results of the Western RC fence line, gold mineralisation has the potential to continue further toward the West.

Neither Disse nor Kandiole North fresh rock gold mineralisation are included in the maiden resource estimation released in early June.

“The mineralication continues to be tested to a depth of 275 m, 125 m beyond the current pit depth of 150 m and remains open for further expansion both along strike and at depth. Numerous deeper holes ended in mineralization clearly showing the potential at depth.

“There are multiple targets including KN2, KN3 and KN4 within broader arsenic geochemical anomalies that require further follow up and have the potential to significantly expand the Kandiole North footprint.

“In Kandiole, we have completed 4,250 m of drilling post the cut-off date drilling for the maiden resource and 7,950 m on the other resource areas.

“This drilling was mainly focused on areas within the exploration target which was outlined to have near term potential to expand the maiden resource by between 8Mt at 1.0 g/t Au to 30Mt at 0.8 g/t Au. Areas such as Disse were not even included in this exploration target and add further upside potential.”