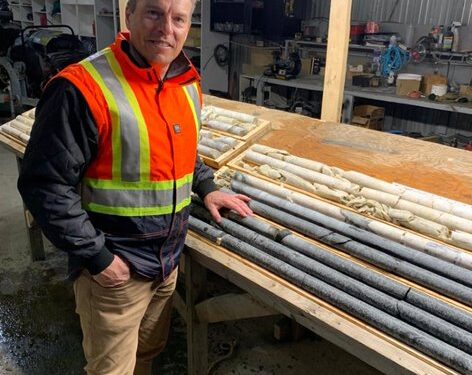 In mid-March 2022, the company launched its confirmatory and expansion winter diamond drilling campaign at the Project. The programme included 22 holes and was designed to infill drill the known ore body and fill in the company’s knowledge gap based on a relatively short programme of 2,000m, due to limited supplies of drill rigs at short notice.

It was also designed to test extensions based on geological interpretation and magnetic survey data.

The highest grade intersected at Cancet was 5.6 per cent lithium oxide (Li2O) with other significant, near-surface intersections recorded.  The results are from assays of the first 15 of 22 holes from the recent drilling campaign carried out at Cancet, with the remaining assays still pending.

Importantly, the pegmatite body at Cancet continues to be delineated and as a result of this drill program, the total identified strike length of identified pegmatites has increased from 600m to 1,200m.

The increase in total strike length highlights numerous follow-up targets for drill testing and the potential for a scalable, near-surface resource at Cancet.

In addition to high lithium grades recorded at shallow depths, significant tantalum mineralisation continues to be intersected. The programme was successful in enhancing delineation of the mineralised envelope and increased sample density around the high-grade main dyke previously drilled.

The zonation of the lithium and tantalum within the mineralised body at Cancet is being investigated further, with geological modelling ongoing to further define the relationship.

“We are delighted with the assay results so far, which reveal high grades of lithium near the surface at Cancet, with the total strike length of known pegmatites increasing from 600m to 1,200m,” Managing Director, Chris Evans, said.

“The results also increase our knowledge of the ore body, with a view to extending the known mineralisation to the east, north and west, keeping us on track to declare a resource in the near term.”