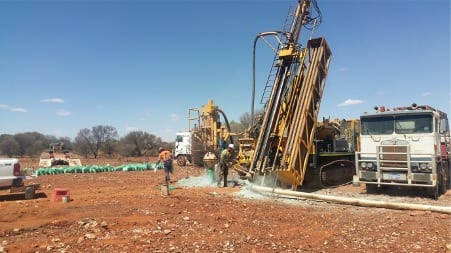 White Cliff Minerals Limited (ASX:WCN) has mobilised a second, and larger reverse circulation (RC) drill rig to the M20/446 permit, which is part of the company’s highly-prospective Reedy South Gold Project in Western Australia that hosts the Pegasus and King Cole prospects.

The revised programme will consist of ~4,500m of RC drilling by two rigs, with the smaller RC rig focusing on shallower (~60-80m) infill drillholes and testing strike extensions.

The larger rig, rated to 350m, will undertake an eight-hole programme aiming to target mineralisation at the Pegasus and King Cole prospects at depth. Concurrently with the drilling programme, White Cliff has completed a detailed geological mapping programme across M20/446.

The Project covers 272 sq. km of the highly prospective Cue goldfields, centred on the southern portion of the prolific Reedy Shear Zone, within the Meekatharra- Wydgee greenstone belt.

The Project is situated 40km north of Cue, via the Great Northern Highway and is 80km south of Meekatharra.

White Cliff declared a maiden MRE of 779,000 tonnes at 1.7 g/t Au for 42,400 ounces of gold. With the style and controls of mineralisation similar to the Triton-South Emu goldmine immediately north of the Project, White Cliff believe there is scope to substantially grow the resource at Reedy South through drilling at depth and along strike.