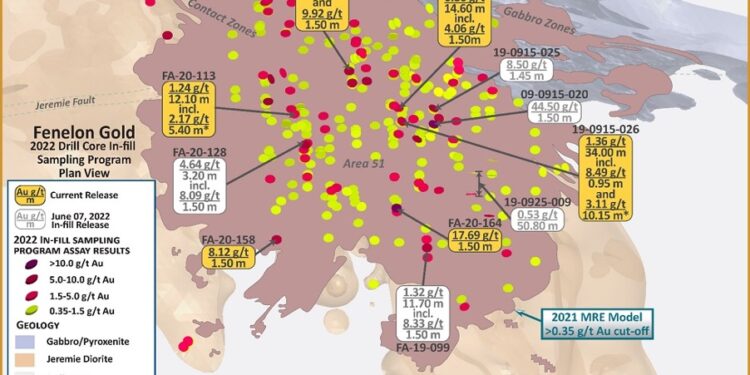 The results include additional gold mineralisation and extensions to mineralised intervals in previously unsampled sections of drill core within and adjacent to Fenelon’s existing Mineral Resource Estimate (MRE) footprint.

“The systematic in-fill sampling program we initiated at Fenelon earlier this year has exceeded our expectations, with a substantial number of previously unsampled drill core intervals returning assays above the cut-off grade for the existing MRE. This underscores the quality and scale of the gold mineralisation at Fenelon and has allowed us to delineate wider mineralised zones and adjust our models for future resource estimates,” said Attila Péntek, Wallbridge’s Vice President, Exploration.

“Based on our improved understanding of the gold system, we will continue to leverage this cost-effective strategy to evaluate intervals of the previously drilled core that have the potential to host gold mineralisation, but may have been overlooked in the past,”

The company has prioritised more than 30,000 metres of previously unsampled drill core for in-fill sampling by the third quarter of 2022. This evaluation will focus on intervals that occur within or adjacent to known mineralised zones.

To date, approximately 25,914 metres of previously unsampled drill core have been collected as part of the 2022 in-fill program, of which results for 19,215 metres have been received.