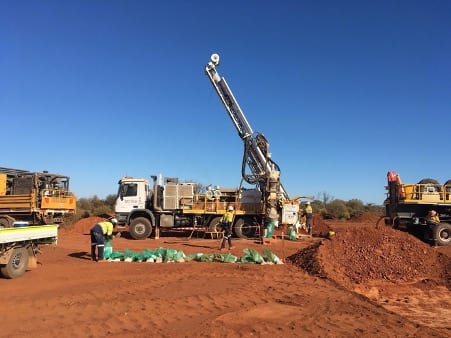 Victory Mines Limited (ASX:VIC) has commenced an RC drilling programme of 6,000m at its Coogee Gold Project in Western Australia.

The drill programme is expected to be completed over a period of approximately six weeks by leading RC drilling contractor Strike Drilling Pty Ltd.

The 6,000m RC drill programme will drill test the following:

A total of 40 drill holes have been planned. The majority of the holes range in depth from 100 to 250m.

Victory expects to provide regular news flow as the drilling programme progresses, with results to be released when they become available.

The project’s location near the major mining centre of Kalgoorlie in Western Australia provides ready access to both significant exploration and mining support services and a skilled workforce.

More distal alteration is made up of hematite–chlorite assemblage, with or without sericite, the broader alteration pattern comprises epidote within a medium to coarse grained dacite and finer grained andesite/rhyolite rock types. The style of gold mineralisation is thought to represent a skarn‐like assemblage.

Gold mineralisation at Coogee occurs within a shear, possibly a thrust, which strikes NNW– SSE and dips to the west at about 25 degrees. High grade gold mineralisation appears to be hosted in shoots on this thrust plane which plunges at what appears to be shallow angles to the south. This recently completed RC drilling programme will enable Victory to confirm the orientation of these shoots which should greatly assist subsequent drilling programmes.