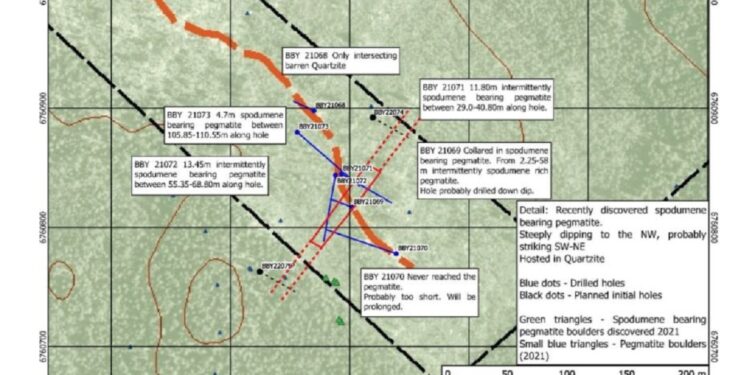 United Lithium Corporation (CNSX: ULTH) has announced the completion of 42 core drill holes at the Bergby Lithium project near Gävle in central Sweden. According to the company, new spodumene bearing pegmatites were discovered in December 2021, with rush assays carried out on hole BBY21069 revealing an intersection of 47.75m of 1.34% Li2O from 2.25 m beneath shallow soil cover. Assays are still pending on most holes and drilling continues at the project.

The new discovery lies 750m northwest of the original Bergby lithium discovery, which was drilled in 2017. United Lithium stated that the site was identified from boulder hunting and sampling, which highlighted the potential at Bergy for new near surface discoveries.  According to the company’s report, the Bergy field has the characteristics of a pegmatite swarm with multiple intrusions, and United Lithium’s technical team anticipates further pegmatites will be located.

United Lithium intend to deepen Hole BBY21170 (which has been drilled 50m south of BBY21069) to test if the spodumene rich horizon is continuous to the southwest. The company have said they also plan to test additional holes to the northeast and southwest extensions of this spodumene pegmatite.

The news release highlights that additional drilling will be implemented to test further northeast and southwest of BBY21069, should the results come back positive.

Michael Dehn, President and CEO of United Lithium stated: “We are excited to have achieved two new blind high grade lithium discoveries on the property in less than half a year of drilling. The boulder sampling program has been very successful at vectoring drill targeting for this new zone. The Bergby project remains very unexplored, and we look forward to further testing of this discovery and additional targets in 2022.”