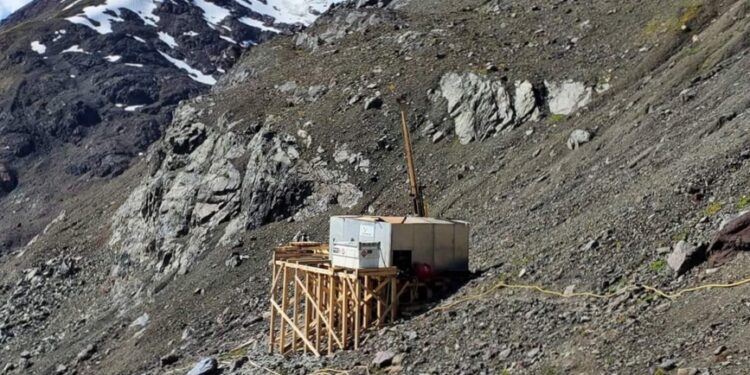 Tudor Gold Corp. (TSXV: TUD) (Frankfurt: TUC) has intersected wide zones of mineralisation in the first set of drill results for Phase l of the 2022 exploration programme at Treaty Creek, located in the heart of the Golden Triangle of Northwestern British Columbia.

The Programme at the Treaty Creek property includes an aggressive resource expansion and delineation plan on several areas including the Goldstorm Deposit and the Eureka and Calm Before the Storm zones.

GS-22-135 intersected 5 meters (m) grading 1.42 g/t AuEQ within 190.5 m of 0.80 g/t AuEQ. The hole targeted a high-grade intercept from the 2020 programme (GS-20-66) which sits outside of the current resource area. The new zone has been named “Route 66” and warrants further exploration to understand the extents of the system. Visible gold was identified in the drill core.

GS-22-129 stepped out on the DS5 resource area and returned 5 m of 2.33 g/t AuEQ within 89.35 m grading 1.02 g/t AuEQ. Gold and silver mineralisation was encountered past the footwall side of the Treaty Thrust Fault 2 (TTF2). The extension of DS5 to the northeast and renewed understanding of the nature of mineralization shows that this domain is vast in size and remains unbounded. GS-22-129 stepped out 150 m from the 2021 drilling.

“We are extremely pleased with the first set of results of our 2022 Goldstorm resource expansion drill programme. We continue to encounter strong gold, silver and copper mineralisation outside the previously defined resource area,” President and CEO, Ken Konkin, said.

“The overall strength and consistency of the Goldstorm system continues to amaze our entire technical team as the deposit remains open in all directions and at depth. We have commissioned the next set of 200 m to 300 m step-out holes based on these overwhelming positive results.

“Additionally, we have confirmed the discovery of a new zone in the southern portion of Goldstorm which adds yet another dimension to this expanding deposit. Based on an intercept obtained in 2020 from GS-20-66 which was formerly believed to be part of the CS600 Domain (2.15 g/t AUEQ over 75.0 m), the 100 m step-out hole GS-22-135 intercepted an up-dip expression of 1.42 g/t AUEQ over 55.5 m.

“This has been named Route 66 (R-66). This is clearly a gold-dominant system that exists separate to the known CS600 and DS5 Domains.

“Drilling continues at a fast pace at Treaty Creek with eight drill rigs on site. Our crews have completed over 20,000 m of drilling to-date and we anticipate more results to be released in a timely manner throughout the summer.”