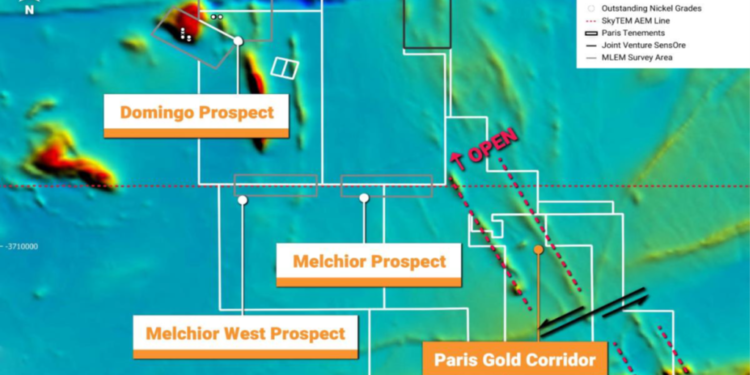 Torque has planned an initial MLEM survey across two focal regions within the Paris Gold Project tenements – the Domingo and Melchior anomalies.

The surveys will test for conductive nickel sulphides. Furthermore, Torque has elevated the interest of an additional target “Melchior West” south of Domingo as result of improvements to the initial survey.

Melchior West will now also be tested by the current MLEM survey.

“The company is excited to be commencing its first round of exploration for nickel at the Paris Project, which follows identification of two high order anomalies as first reported by Torque in its ASX Announcement dated 30 March 30, 2022,” CEO, Cristian Moreno, said.

“Base Metal Potential Identified by Strong Conductors at Paris Project”. The MLEM geophysical surveying technology has been instrumental in the finding of large-scale nickel sulphide deposits throughout Western Australia.

“The results of this survey will considerably aid Torque in prioritising targets for follow-up exploration and drilling. We anticipate plenty of news flow from this nickel search, and the Paris gold drilling programme in the coming weeks.”

The Melchior Prospect has two airborne electromagnetic (AEM) anomalies which resemble the AEM anomaly seen at Mincor Resources’ Cassini prospect approximately 25 km to the West. The ground EM programme will further test for the presence of conductive nickel sulphides at Melchior.

Given the significance of the high-grade gold results released a month ago, Torque is planning to commence a follow up drilling program at the Paris Prospect as soon as possible.

Torque anticipates drilling will re-commence in early August or sooner if a suitable rig can be secured.

Drilling will test the following:

• Western extensions of the Paris prospect high grade gold trends, with a view to rapidly increasing the gold inventory at that prospect;

• The extent of the gold mineralisation continuity at the Paris South prospect, tracking historical high-gold grades within a strong, 300m long geochemical anomaly; and

• The Carreras, and Pavarotti geochemistry anomalies to test for sub surface gold mineralisation.