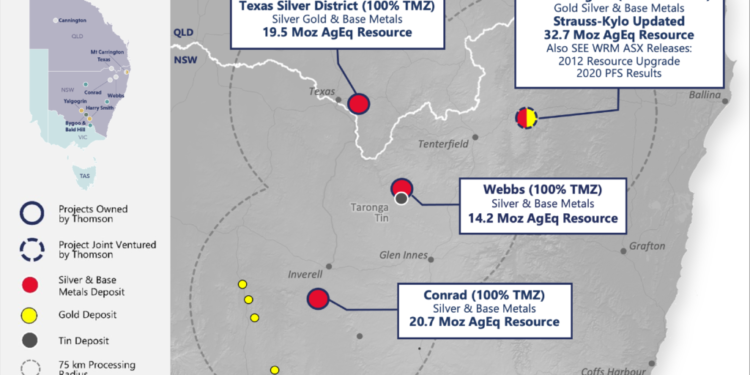 A central processing option was settled on with satellite sites at the Mt Carrington project and the Webbs Silver project that feed into a Central Processing Facility at a new site near Tenterfield, NSW. The selection of a site near Tenterfield was primarily based on its proximity to the Mt Carrington project, which will have the largest resources available to a central processing facility.

The Mt Carrington site and Webbs Silver sites would both have a crushing/grinding and flotation circuit to produce rougher concentrates to be sent to the Tenterfield site for further processing. It may also be viable to transport Silver Spur ore to the Webbs concentrator for processing. Conrad ore is envisioned to be processed at the mine site using the relocated Webbs concentrator.

The central processing facility near Tenterfield includes an Albion Process plant as well as an intensive cyanidation circuit and Merrill Crowe plant for the production of gold/silver dore. The Albion Process plant allows for the production of higher value products from the Webbs Silver resource and also provides a method to generate value for the zinc contained within the Mt Carrington resources if high-grade zinc concentrates cannot be produced. It may also be used for the processing of Conrad ore.

The indicative production schedule is set out in Annexure 5. Net revenue figures (using current metal prices) considering the cost of transport as well as metal payables were calculated for assumed products. An annual cash flow considering typical mining and plant operating osts for similar types of production plants was then prepared to provide an indication of funds available to pay back capital and generate project profits (see Annexure 6). This analysis showed positive cash flows.

Executive Chairman, David Williams, said however, further engineering is required to establish the actual operating and capital costs for the project which will be completed in a formal concept study following further testwork.

“Core Resources have produced a very thorough and well worked Stage 1 Central Processing Pathway Study. We now have a clear pathway forward as to what the New England Fold Belt Hub and Spoke Strategy (NEFBHS) will look like,” Mr Williams said.

“The very pleasing aspect of the Study is that even with using today’s current low metal prices and without expanding the resources or fine tuning the processes, the early stage indicative numbers are positive for proceeding forward with the Strategy.

“Whilst I appreciate that they are only indicative numbers, to see that even at today’s prices and using only four of the deposits, the indicative cashflows from techno-economic evaluation estimate (before capital expenditure and capital costs) show a positive cashflow over the eight-year project life of A$334M (using a silver price of A$28/oz), with A$206M accumulating in the first three years.

“It is true that the Study was less than positive about the Texas project remaining part of this strategy, and the company is now giving serious consideration to what happens with Texas.

“As we add more resources through further extensional/expansional resource drilling activities and as the metal prices, particularly silver, increase, this NEFBHS project will just get stronger.

“Core have provided a clear pathway of work for Thomson to undertake so that we can move to completing a formal concept study. We look forward to reporting progress on this work as it is implemented and completed.”

The key projects underpinning the NEFBHS concept were strategically and aggressively acquired by Thomson in only a four-month period from November 2020. This includes the Conrad, Webbs and Texas District silver/gold/zinc/lead/copper (tin) projects.

Thomson has reported Mineral Resource Estimates (MRE’s) to JORC 2012 for the 100% owned Webbs, Conrad, Silver Spur, Twin Hills and Mt.Gunyan deposits and restated the Strauss-Kylo MREs (Thomson earning up to 70% interest) that contain a combined total of 22.8 Mt at 119 g/t AgEq for a total resource base of 87.1 Moz of AgEq.