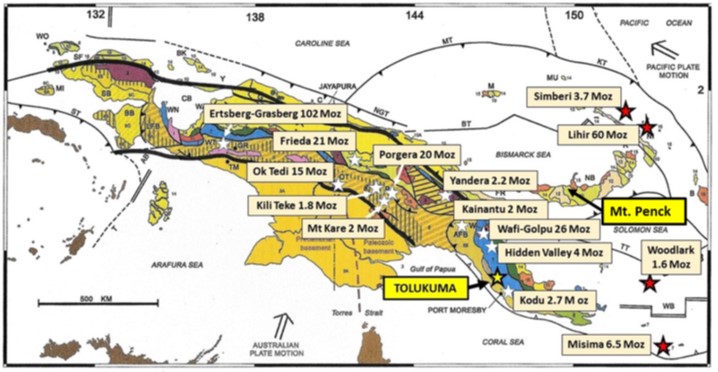 This transformative deal means TEM shareholders will benefit from the additional value of a near term production asset within a +2,000 sq. km exploration portfolio along strike from some of the biggest gold and copper mines in the world.

The deal comprises a conditional multi-stage transaction where Lole will amalgamate with TEM under its ownership in Papua New Guinea on an equity-based acquisition value of approximately A$25.7M. The completion of the acquisition is subject to a number of conditions including: successful due diligence, shareholder approval and capital raising to support the transaction.

“This is a major milestone development for Tempest and our shareholders. In line with the company strategy of sustainable discovery and development, we are pushing full steam ahead with our exploration fronts at the Meleya and other Yalgoo regional projects in Western Australia,” Managing Director, Don Smith, said.

“At the same time we have identified this fantastic opportunity to drive growth by positioning ourselves as a near term gold producer with associated revenue stream and by adding high potential exploration ground to the portfolio.

“Many of the current TEM team have previously been mine developers and we are really excited to work with the great team at Lole and look forward to generating value through this transformative deal.”

The Tolukuma Mine produced high grade gold and silver intermittently since commencement in 1995. To date, the mine has produced approximately 1 Moz Au and 2.4 Moz Ag from small open pit and underground operations. The project currently boasts a legacy mineral resource estimate.

Tolukuma has significant established infrastructure including a fully established power system – both hydropower and diesel, mine camp and helipad facility which requires some refurbishment but comes at a replacement value of approximately $200M. Tolukuma has been on care and maintenance since 2015.

Much of the mine is accessible and it is anticipated that after a preparatory phase; access to the existing mine workings can be readily achieved, dewatering commenced and production restarted in the near term achieved along with drilling of known structures in order to extend the current mineralisation.

The Tolukuma Mine has been subject to limited modern exploration and is considered to have substantial copper and multi-million gold ounce potential in line with many other comparable projects in the region. The mine itself also sits within a highly prospective 2000km2 exploration package with significant potential for further discoveries. Historic data has yielded multiple high priority drill ready targets across the portfolio and the potential to generate further short-term processing feed.

Mt Penck – The Mt. Penck project is located in the West New Britain Province of Papua New Guinea with vehicle access possible by car through existing agricultural infrastructure roads from the nearby town of Kimbe.

Mt. Penck is located on the strategically important Kulu-Simi regional geological structure and the mineralisation found to date is classified as a high sulphidation epithermal system, likely fed by underlying porphyries. This mineral corridor hosts a number of other notable projects with similar geology such as Mt Andrea, Simuku Copper-Moly and Mt Nakru Copper-Gold deposits. The larger New Britain arc and surrounding islands to the north host further large-scale deposits including the giant 60Moz Lihir deposit.

The Project has a history of successful exploration dating back to at least the 1960’s however no exploration has been completed since 2011. Parts of the project (Meto Creek) were explored by major companies such as BHP and Placer.

Much of this work comprised preliminary surface sampling with results such as 49.4 gpt Au in rock chips, 17gpt pan concentrate from stream sediments and a 1200ppm Arsenic in soils being recovered but not followed up prior to the relinquishment of the project during the BHP/Newmont consolidation into Newcrest.

Previous exploration programmes have identified significant gold intercepts along with the enormous copper and gold potential at the project. Large conceptual exploration targets have been reported at Mt. Penck which are yet to be verified and are not in accordance with the JORC or other international codes and viewed as conceptual guidance of potential only.

Summit Minerals Commences Trading On ASX On Back Of Oversubscribed IPO

Summit Minerals Commences Trading On ASX On Back Of Oversubscribed IPO