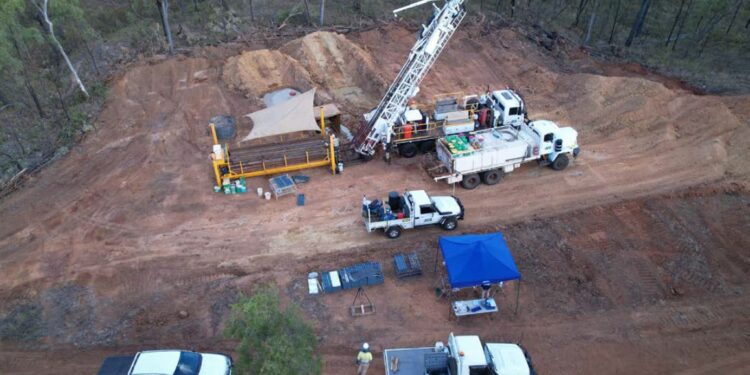 The programme comprises initially eight deep diamond holes for a total of 3,700 metres. The drill holes are targeting the core of at least one large interpreted Cu-Au-Mo porphyry system that is coincident with a 1.5km x 1km soil copper anomaly and a 1km-wide induced polarisation (IP) chargeability anomaly.

ystematic drilling during 2018 and 2021 targeted the most intense IP chargeability anomaly, which is now considered to represent structurally-controlled mineralisation that is distal to at least one large Cu-Au-Mo mineralised porphyry system.

Structural information from the extensive mineralisation in BTDD004, together with multi-element soil geochemistry data, detailed surface alteration mapping and remodelled IP data, indicate that the core of a buried porphyry system lies to the west of BTDD004, where better mineralisation is expected.

“We have just commenced the company’s most anticipated and exciting drilling programme, targeting what we interpret to be the core zones of multiple copper-gold-molybdenum porphyry intrusions,” Managing Director, Peter Hwang, said.

“Our step-by-step approach to this program focuses initially on a compelling and strong central zone of copper-gold-molybdenum soil anomalism, which is supported by a newly remodelled large chargeability anomaly, airborne magnetics and satellite imagery-interpreted intrusion centres.

“All of this sits down-dip and behind the massive 632 metres of copper mineralisation returned from BTDD004.

“However, the chargeability anomaly is large and extends for about one kilometre, so apart from having very large size potential, we do have a lot of ground to cover.

“Apart from the drilling, we will also be extending last year’s multi-element soil geochemistry program westwards as indications are that porphyry mineralisation extends significantly further than the 1.5 kilometre soil copper zone that originally defined Bottletree.

“We will also be extending the MIMDAS IP survey to cover the expanded prospect area.

“We have an exciting few months ahead of us and we will be updating the market regularly as we receive significant visual and laboratory results.”

Wood Mackenzie Insight: What the Strategies of the Diversified Miners Mean for the Industry