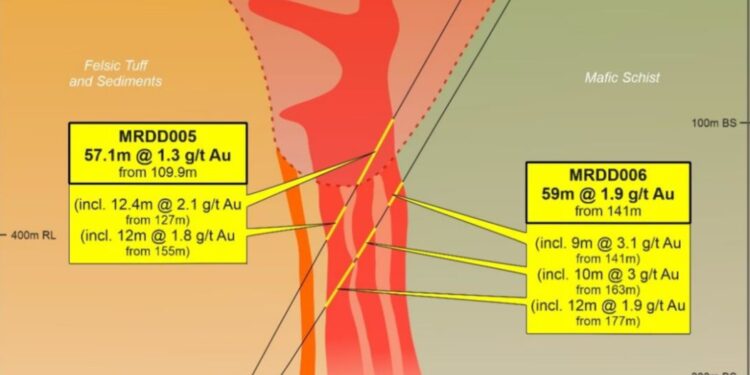 “The continuity of both grade and width is particularly notable, as it continues to confirm our belief that Millrose is a part of very substantial gold system. Importantly, the mineralisation remains entirely open along strike and at depth.

“Visual observations from the drilling to date suggest the gold bearing structures remain intact to the north and south; areas which lie outside of the current resource area. Assays are expected from these areas over the coming month. As a general observation, grade appears to be increasing with depth.

“The higher-grade intercept, previously reported in MRDD008 (8.1m @ 14.6 g/t Au from 216m, the deepest intersection to date), is interpreted to plunge just below the zone of mineralisation from diamond hole MRDD006. Structural lineation measurements from the drill core suggest a northerly plunge of around 20 degrees. Further drilling is required to map this zone of high-grade mineralisation downplunge.

“Also of particular importance is the ongoing robustness of our geological model, which is again confirmed by these results. Across the project area the previously identified BIF unit, which is clearly visible in historic magnetic surveys, continues to be a critical marker horizon for the gold mineralisation.

“A magnetic survey is currently underway to provide greater definition of this unit, which will allow for more accurate drill target testing of the 13km main mineralised shear structure along strike. We’re very excited to receive further assays from the Millrose central and northern extensional drilling (both outside of the current mineral resource area) in the coming month. Both areas represent a fantastic opportunity to substantially grow the mineralisation footprint.”

The impressive continuity of both width and grade demonstrates the potential scale of the gold system at Millrose.

The company has secured a third rig to arrive during July 2022. This RC rig will focus on drilling the northern and southern extensions to the existing Millrose gold mineralisation. It also offers the Company the flexibility to conduct small regional exploration programs while awaiting gold assays from Millrose, including to potentially follow up the Zn-Pb mineralisation at Iroquois as well as the surrounding areas at Dusk til Dawn.