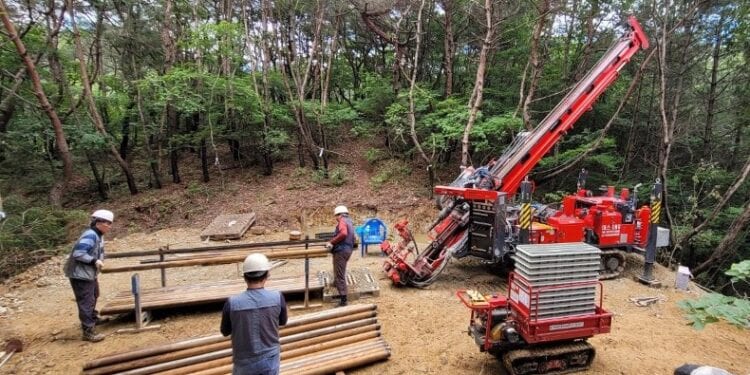 Southern Gold (ASX:SAU) has kicked off a new drilling campaign at the Nettle zone within the Deokon Project in South Korea.

The company believes the combination of a prospective structural trap, competent host rock in the area at depth (andesite), silica-illite-adularia-pyrite alteration and high-grade gold silver in outcrop and low-sulphidation geochemical signature, represents a compelling drill target at Nettle.

A high level of recent field activity has advanced the Deokon Project along strike of known mineralised zones. This has resulted in the previously announced discovery of the Thistle and Nettle zones, which has extended the Golden Surprise Trend to a strike length of at least one kilometre.

An initial soil sampling grid over the trend revealed a strong Au-Ag-As anomaly at Nettle, and this was recently followed up with an extensional soil sampling program and detailed structural mapping, which confirmed that the location near the Nettle outcrop is the most prospective zone to drill test.

The outcrop at the Nettle Zone has returned a previously announced peak rock chip assay of 8.56g/t gold and 8,940g/t silver.

The drill testing at Nettle is targeting an interpreted intersecting structural position of the NNW Golden Surprise trend with an NNE trend.

The latest soil sampling programme was designed to define the full extent of the Au-Ag-As soil anomaly, identified from the Phase 1 soil programme completed in the March Quarter, which was open to the north.

A total of 88 samples were collected to the north of Nettle, completed at 25m spacing on 50m spaced lines. Bulk samples were taken of the B-horizon and sieved in the laboratory to <6 mesh (~3mm). The programme successfully closed off the coincident Au-Ag-As anomaly in soil at Nettle.

Detailed field mapping was also completed which confirmed the presence of multiple intersecting structures at Nettle, along with the overall intersection of the NNW Golden Surprise trend with a NNE trend.

This, combined with the soil anomaly location, represents a compelling structural position and drill target.

The drill programme will involve at least two diamond drill holes for 250m and likely a third targeting the intersection point of the Nettle NNE trend and the Golden Surprise Trend. Additional holes may be planned along strike depending on initial results. This may include holes at Thistle and Thorn in due course.