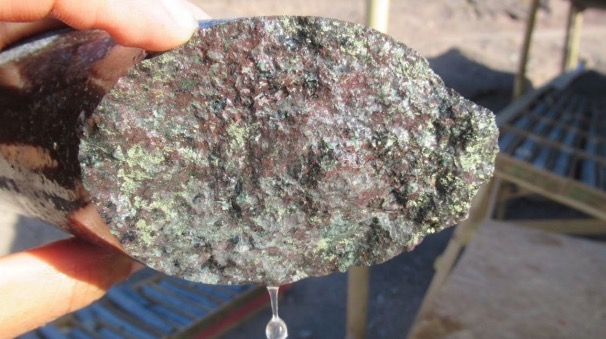 Copper sulphides, sometimes locally abundant, have been observed during logging of the first two holes completed from surface down to 362m (in hole 1) and 444m (in hole 2), as part of an initial 2,000m diamond drilling programme at the flagship Mostazal Copper Project.

Drilling has encountered visible copper sulphide mineralisation in both of the first two holes completed (MODD001 and MODD002), comprising several mineralised zones from surface consisting of chalcocite+/-bornite occurring as amygdales, fracture fillings or in veinlets (with quartz-epidote-chlorite-calcite) and/or chalcopyrite.

Detailed logging of MODD001indicates successful intersection of the targeted “manto” type copper mineralisation from the surface with disseminated sulphides logged extending from surface to the end of the hole (362m) and from surface to at least 444m depth in MODD002. Individual “mantos” are less than 2.0m thick and encountered in stacked packages that may reach approximately 10m in thickness. Final mineralised intervals remain to be defined based on pending assay results.

“Drilling is progressing very well, with our first two drill holes now completed, and we are off to a fantastic start at Mostazal. These first drill holes were designed to test the near surface manto-style mineralisation encountered in the historic drilling, and our logging has confirmed the presence of widespread alteration and disseminated copper sulphide mineralisation throughout both holes,” CEO Jason Cubitt said.

“Assay sampling of MODD001 is now well underway, with an expected laboratory turnaround time of at least four weeks from the receipt of samples.

“The drill rig has now moved and commenced drilling at the third planned hole (MODD003). This drillhole is targeting the heart of the interpreted IP chargeability geophysical anomaly, which we believe may represent a feeder structure for the extensive manto-style copper mineralisation found closer to surface at Mostazal and drilled in our first two holes.”

The Mostazal Copper Project is located 80 kilometres (km) northeast of Copiapo, Chile and within the Domeyko fault, which is a major structural control for some of the world’s largest and most productive copper mines*, including Chuquicamata and Escondida, and 40 km south of Codelco’s El Salvador mine.

The initial phase of drilling comprises four holes for an estimated 2,000m of drilling and will initially target both porphyry and manto-style copper mineralisation as well as the interpreted feeder system (porphyry) structures at depth.

The drill rig is now positioned at the third drill site to the south of MODD002to commence hole MODD003. This third hole is designed to test a high chargeability anomaly which potentially represents the presence of a feeder system/ porphyry copper mineralisation.