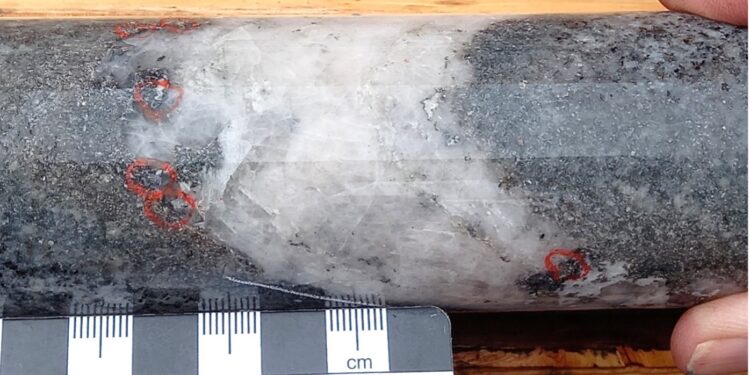 Seven separate veins hosting trace visible gold were observed between 39 and 220 m downhole during initial logging. The collar location is a 154-metre step-back from 2021 hole V-21-003 which also encountered a broad zone of mineralisation from the bedrock surface.

“Hole V-22-005 was designed to get a better sense of the width of the sheeted quartz vein arrays that constitute the Valley Zone,” said Scott Berdahl, CEO and Director of Snowline. “That we encountered mineralisation at surface is encouraging, as this expands the known surface width of the Valley Zone by roughly 150 metres, and the width remains open.

“The true significance of the mineralisation awaits assay results, but we are pleased to see this initial demonstration of scale. Subsequent holes will begin to test the strike length and depth of the mineralised system.”

Small (sub millimetre) grains of visible gold were identified at around 39 m, 63 m, 88 m, 126 m, 197 m, 211 m and 220 m depth during initial evaluation of the drill core. Gold grains are associated with minor bismuthinite and/or telluride grains within the thin quartz veins. Vein densities average three to five per metre throughout the hole so far, with localised zones averaging up to 20 veins per metre.