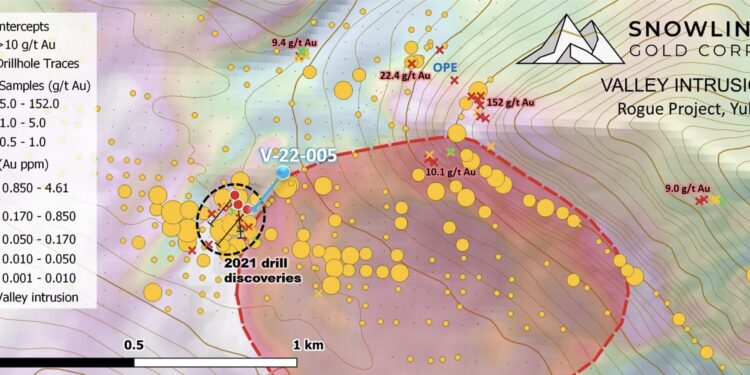 Snowline Gold Corp. (CSE: SGD) has commenced its 2022 exploration and drilling programme in the Yukon.

Phase II diamond drilling is underway at Rogue’s Valley zone to test the extent of gold mineralisation encountered by drilling in September 2021 within a soil and talus fine anomaly spanning roughly two km.

“Following an exceptional first season with two drill discoveries on our adjacent Rogue and Einarson projects, we are very excited to return to the field,” said Scott Berdahl, CEO and Director of Snowline.

“Our team has already done a tremendous job setting up for an early season start amidst our new camp build and a record-breaking spring snowpack. Snowline’s 2022 drill program gives our shareholders much to look forward to as we simultaneously build on recent successes and position ourselves to make additional discoveries.

“Our results will shed new light on our large and relatively unexplored land package, which we believe has the potential to become a new North American gold district.”
The geological setting and style of mineralisation at Valley demonstrate the presence of a bulk tonnage gold target, with similarities to Kinross’s Fort Knox Mine in Alaska and Victoria Gold’s Eagle Mine in the Yukon.

An 800 m Phase I drill programme conducted at Valley in September 2021 encountered broad zones of gold mineralisation in all four holes.

Gold is associated with bismuthinite and telluride minerals hosted in sheeted quartz vein arrays along margins of a mid-Cretaceous aged Mayo-series intrusion.