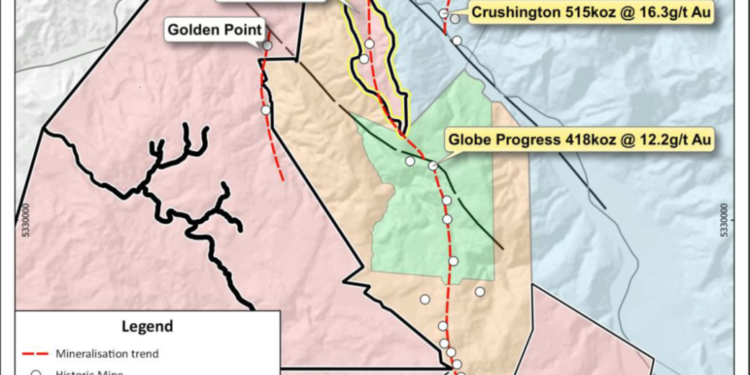 • Between 1996 and 2013, Oceana Gold Limited (OGL) drilled 17 diamond holes for 2,016m, defining a mineralised zone up to 13m true width. The Fraternal mineralisation strikes north-south for over 100m, hosted in a steeply west-dipping shear zone parallel to a small anticline hinge.

The highest grades in the deposit are generally associated with strong stibnite mineralisation. The deepest drillhole intersected gold mineralisation less than 100m below surface, and mineralisation remains open at depth and along strike.

The Auld Creek Prospect is contained within Siren’s Golden Point exploration permit and is situated between the highly productive Globe Progress mine, which historically produced 418koz @ 12.2g/t Au, and the Crushington group of mines that produced 515koz @ 16.3 g/t Au.

More recently OGL mined an open pit and extracted an additional 600koz from lower grade remnant mineralisation around the historic Globe Progress mine.

The Auld Creek mineralisation extends for over two km and appears to represent a block that was potentially offset to the west, along NE-SE trending faults between Globe Progress and Crushington.

Arsenic and gold soil geochemistry from Big River to Crushington appears to confirm this interpretation. The gap in soil geochemistry north of Big River is due to the presence of coal measures that overly the Greenland Group sediments that host the gold mineralisation.

The Reserve Area is quarantined until 6 December 2023, while OGL is rehabilitating the mine site. The remaining area was opened for permit applications in a tender process. Siren Gold lodged an exploration permit application, but New Zealand Petroleum and Minerals (NZPaM) has not yet decided on the successful party.

Additional drilling is required to:

• Test for extensions for Fraternal of the mineralisation along the 700m soil anomaly.

• Drill some deeper holes to define the plunge of the Fraternal shoot and test the grade and thickness of mineralisation to around 500m below surface.

• Only one hole has been drilled in the Bonanza reef. Additional drilling is required to test this reef along strike and down dip.