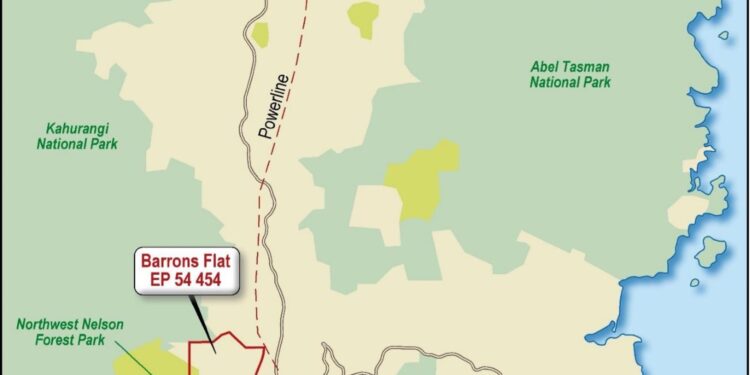 Siren Gold Limited (ASX: SNG) has entered into an agreement to acquire the Sams Creek Gold Project in New Zealand from Sandfire Resources Limited for a consideration of A$250,000.

• The Sams Creek Gold Project currently has a significant JORC (2012) Mineral Resource of 7.5Mt @ 2.43g/t Au for 588koz of contained gold1, with a significant potential for expansion.

• Extensive gold mineralisation hosted within a 40m thick porphyry dyke that extends for over 7km and is open at depth.

• Both Reefton and Sams Creek have similar metallurgy that would produce an arsenopyrite flotation concentrate suitable for central downstream processing.

Siren already has a large strategic tenement holding in the Reefton and Lyell Goldfields, which historically produced over 2Moz of gold at an average recovered grade of 16g/t. This includes the key projects of Alexander River, where Siren recently intersected 2.5m @ 358g/t Au in diamond hole AX84 and Big River where BR04 intersected 6.6m @ 21.4g/t Au.

The Sams Creek Gold Project is located 140kms NE of Reefton and 100kms NE of Lyell. The Project comprises two exploration tenements: EP 54454, which is 100% held by Sams Creek Gold Limited (SCGL) a wholly owned subsidiary of Sandfire, and EP40338, which is 81.9% held by SCGL under a joint-venture agreement with New Zealand’s largest gold miner, OGL, who own the remaining 18.1% interest.

The Sams Creek Project is in Golden Bay, approximately 20km south of Takaka and 20km northwest of Motuaka, at the northern end of the South Island of New Zealand. The project straddles the Takaka River and the Cobb Hydro Power Station access road that branches off State Highway No. 6 at the Upper Takaka settlement.

The Sams Creek Gold Project is divided into several exploration prospects along the strike of the Sams Creek Dyke (SCD), and includes Riordans, Western Outcrops, Doyles, SE Traverse, Carapace, Main Zone, Anvil and Barrons Flat. The SCD is up to 60m thick and can be traced E-W over 7kms along strike. The dyke generally dips steeply (~60o) to the north, where it intrudes quartzite and sandstone dominated lithologie, but dips more shallowly to the NW and SE between the Carapace and Western Outcrops where it intrudes argillite.