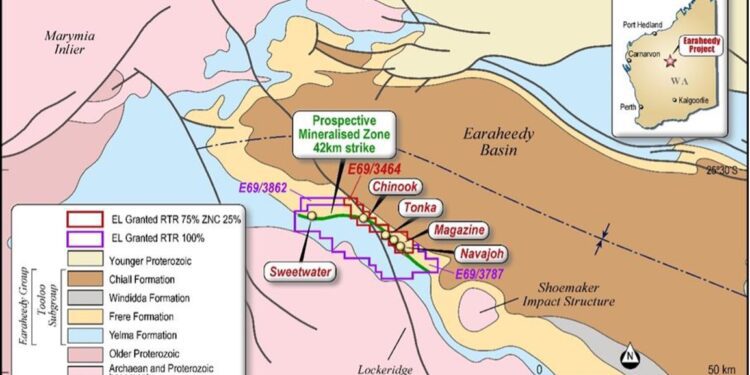 Rumble has potentially discovered an emerging world class base metal system having only partially tested one geological formation and a very small portion of the Earaheedy Project area.

The granting of E69/3862 and E69/3787 represents a fourfold increase in the Earaheedy Project tenure, opening a vast new highly prospective area for new discoveries in all five mineralised styles

In 2021, Rumble completed a large 50,000m drilling programme (approximately 50% of assays are pending) which scoped approximately 19km of prospective mineralised strike within E69/3464 discovering the Chinook Prospect currently defined over an area of 4.1km by 1.9km and the Tonka-Magazine-Navajoh Prospects defined over a combined area of 6km by 1.2km. Both zones remain open in all directions.

The recently granted tenure, E69/3787 and E69/3862, which is 100% controlled by Rumble, extends the prospective untested mineralised strike (Navajoh Unconformity) by more than 100% with some 23km of additional strike to be tested.

Significantly, the newly granted tenements will allow Rumble to extend drilling west and northwest of the very large- scale mineralisation footprint (4.1km by 1.9km and open) at the Chinook Zn-Pb-Ag-Cu Prospect. D

rilling by Rumble has defined extensive Zn-Pb-Ag mineralisation along the boundary of the current JV tenement and the recently granted 100% Rumble tenure.

Focus of Initial Exploration within the New Tenements

This zone of interest, known as the “Sweetwater Trend”, incorporates the potentially mineralised west and northwest extensions of the Chinook Prospect and some 12km further west, two historic drill holes – representing the only known historic drilling in the area. Anomalous results from these historic holes include: