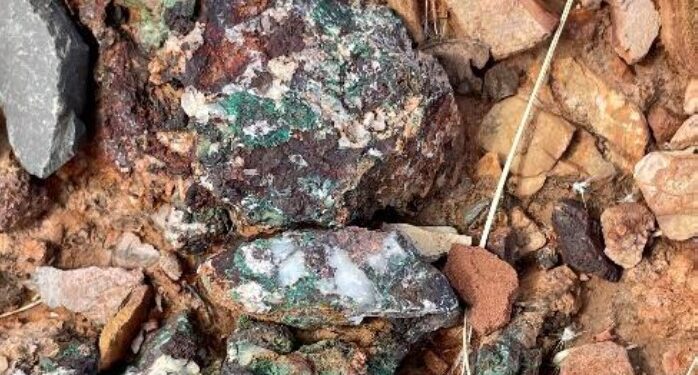 Rincon Resources Limited (ASX:RCR) has confirmed the Kurili Hill Prospect as a new high-priority target area at its South Telfer Copper-Gold Project located in the Paterson Province of Western Australia, 12km south of the Telfer Gold Mine.

The Kurili Hill Prospect, located about 1.7km northwest of Hasties, was first identified and drilled by Newcrest Mining Limited in 1997. Newcrest drilled several broad spaced holes to test the outcropping malachite (copper-oxide) rich gossan and breccia but failed to complete further follow-up drilling at depth and along strike, predominantly to the south-east.

Importantly, not only was copper mineralisation intersected at shallow depth below the copper rich gossan/breccia, but it was also intersected over a current strike length of 200m.

A recent site inspection observed the significant outcropping malachite (copper-oxide) rich gossan and breccia over at least 200m of strike and up to 20m in width.

A review of the historic drilling data indicates the copper mineralisation remains open at depth and untested with the previous wide space drilling by Newcrest failing to test the interpreted moderate to steep west dipping mineralisation immediately down-dip.

Lastly, an interpretation of magnetic and aerial imagery suggests the copper bearing horizon can be trace over an untested strike length of up to 2km to the southeast. Of significance, is historic drillhole HAB1002, inferred to have tested the same copper horizon, intersected 16m @ 0.29% Cu from 4m at the south-eastern end of the 2km strike length.

Managing Director, Gary Harvey, said the emergence of the Kurili Hill Prospect now provides the company with four priority target areas including Hasties Main Zone, Hasties South-East Zone, Frenchman’s Prospect and now Kurili Hill Prospect, all within a 2km radius from the Hasties Prospect, within the Hasties Tenement Area only. This is in addition to the company’s multiple untested targets within the Central and Westin Tenement Areas, where up to 10,000m of aircore drilling is scheduled to commence in August 2022.

“We were aware of anomalous copper at Kurili Hill but not this, I was surprised to see the extent of malachite rich gossan and breccia at surface, indeed significantly more than I had seen previously at the Hasties Main Zone before we commenced drilling there last year,” Mr Harvey said.

“With known copper mineralisation open and untested at depth and potentially along strike for up to 2km, this is possibly the most significant new target area unearthed at South Telfer yet.”

Next Steps and Other Activities: