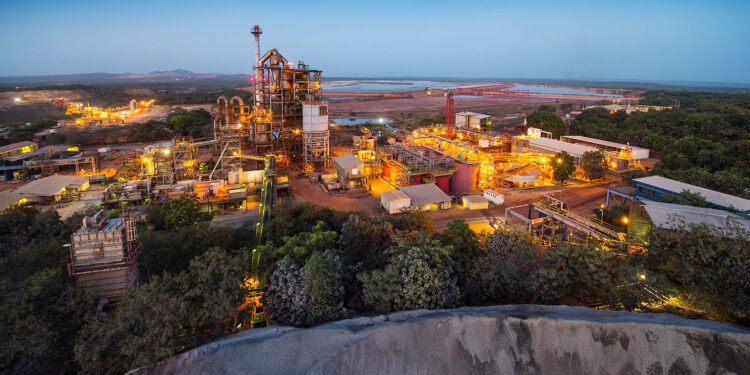 The exploration drilling program at Syama North, initiated during 2021, recorded significant oxide and sulphide gold mineralisation intersections in and around the originally mined out oxide pits of A21 and Beta/BA-01 located within four to eight km of the main Syama mining and processing complex.

The results of this programme were reported in the ASX announcement of August 25, 2021, and in the annual Ore Reserves and Mineral Resources Estimate released to ASX on March 4, 2022.

The main target for the 2021 exploration programme at Syama North was expanding the oxide resources, following on from the successes of 2020, however a substantial sulphide mineral resource, at greater than one million ounces, was outlined by the programme.

As the sulphide mineralisation remains open at depth and appears to be contiguous along the 2.5 km strike length, this has created the potential for further open pit, and eventually underground, mining for sulphide ores in this area.

Based on the 2021 exploration results open pit operations resumed at Syama North in late 2021 extracting additional oxide resources from both Beta and A21 after the previous phase of oxide mining in this area concluded in 2018.

The Syama North sulphide resources have not been included in recently published LOM plan updates.

The 2022 drilling programme was undertaken with the intention of upgrading and expanding these resources to capitalise upon the recent significant process improvements and successful refurbishment of the Sulphide Plant achieved over Q1 2022.

Diamond and RC drilling recommenced in early 2022 at both the A21 and Beta pits. The drilling program targeted the down-dip extensions of the identified zones and was successful with the majority of the holes intersecting sulphide mineralisation.

Results from holes drilled to date have been returned with significant intersections seen in numerous holes confirming the extension of the mineralised zones along the entire strike length of the original A21 pit.

These results represent some of the best gold intersections ever recorded from the Syama North area. With the new-found confidence in sulphide mining and processing over the last 23 months this has re-invigorated the exploration department to explore for new oxide and sulphide resources.

A new low-level, high definition heliborne aeromagnetic survey will shortly be conducted to improve on the historical wide-spaced aeromagnetic coverage. This survey is planned to cover the whole 85 km length of the Greenstone Belt held under license in an effort to delineate more sulphide resources, which are the long-term future of the mining operation.