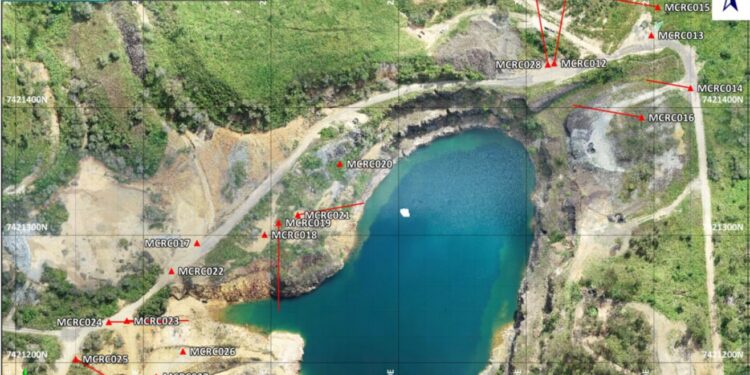 High-grade copper equivalent (CuEq) results have been intersected in the nine most recent RC drill holes reported from the May – June drilling programme, including up to 5.1% CuEq in MCRC012 and 4.1% CuEq in MCRC017.

The company continued RC drilling operations at Mt Chalmers during June with an additional eight RC holes completed for 1,015 metres drilled. All drillholes were sampled at one metre intervals with samples being submitted to ALS Laboratories in Brisbane for assay.

“Further step out drilling is continuing where the deposit remains open in a number of directions. The RC drill rig and our drilling team are performing exceptionally well with significantly more meters being delivered on a more regular basis. More results are expected shortly with a further eight holes submitted to ALS for assay.”

The aim of the current drill programme is to expand the resource (step-out drilling) and upgrade the resource by infilling areas of low confidence. Mineralised intersections in some holes are broader than expected based on historic drilling. In addition to broader zones of mineralisation, stacked mineralisation horizons have also been noted.

The current programme comprises a planned 30,000m drilling programme for 50 RC holes designed to identify new mineralisation and provide a greater understanding of the geological controls.

The recent drilling has assisted in identifying a second mineralised horizon not previously recognised.

The current drilling programme at Mt Chalmers is planned to continue throughout Q2 and into Q3-2022 for a total program of approximately 30,000 metres (3,177m now completed) with results now being reported on a regular basis.

So far in June, the company has completed approximately 1,015 metres of RC drilling. This is in line with company’s monthly expectations for metres drilled and will continue to provide investors with consistent news flow over the coming months.