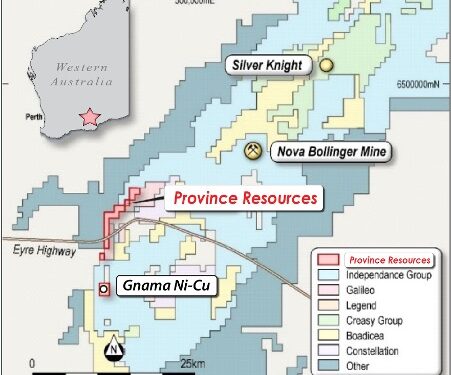 Province Resources (ASX:PRL) has completed a number of activities in the lead up to drill testing its 100% owned Gnama nickel-copper project in the Fraser Range Province of Western Australia.

The company has engaged the Ngadju Native Title Aboriginal Corporation, as representatives of the traditional owner groups at the Gnama Project, to notify them of the requirement to complete a heritage survey across E63/1935. A heritage survey was completed in November 2021 to clear areas for the March 2022 drilling programme. The expanded survey area will enable Province to implement follow up drilling testing extensions of the same fertile intrusion encountered in that drilling.

In addition, flora and fauna surveys will be carried out across the expanded area of interest. The scope has been provided to the consultants used in the previous surveys and engagements will be finalised shortly.

A Programme of Works will be lodged once the results of these surveys are available.

Province plans to complete six deep RC holes at Gnama testing extensions to the mafic-ultramafic intrusive body intersected in its March 2022 drilling programme. Geochemical analysis showed that this intrusion had many similarities to the intrusive which hosts the Nova-Bollinger nickel-copper deposit (owned by IGO).

The drilling programme aims to provide both geological and geochemical information to enable the company to vector in to the most prospective parts of the intrusion as well as enable downhole EM surveying to be completed to detect concentrations of sulphide minerals.

The company has engaged Southern Geoscience to review historical geophysical surveys over the project area. Sirius Resources completed EM surveys when it previously held the tenure, and the review will ascertain whether any target area present or whether the survey may have been ineffective in any way. EM survey techniques have advanced significantly in recent years, in part due to work in new frontiers such as the Fraser Range where the presence of conductive cover, groundwater and sedimentary units has prompted refinements to the traditional methods of data collection and processing.

Province’s drilling programme aimed to comprehensively test the bedrock below the supergene anomalism identified by Sirius Gold Pty Ltd. Drilling successfully intersected mafic intrusive bodies in close proximity to the Snowy’s Dam Formation, identified as a source of sulphur and crustal “contaminants” in the formation of the Nova-Bollinger Deposit (Maier et. al., 20161). Geochemical data from the Gnama intrusion displays a similar fingerprint to the “Eye” instrusion which hosts the Nova-Bollinger Deposit. Analysis indicates that nickel is present in higher concentrations than can be explained by lithology alone and is likely present as nickel in sulphides. Encouragingly, assays from bedrock samples contained significant contents of sulphur with values averaging 0.5 % through the mafic intrusive.

OreCorp Identifies Opportunities To Extend Nyanzaga Life of Mine In Tanzania