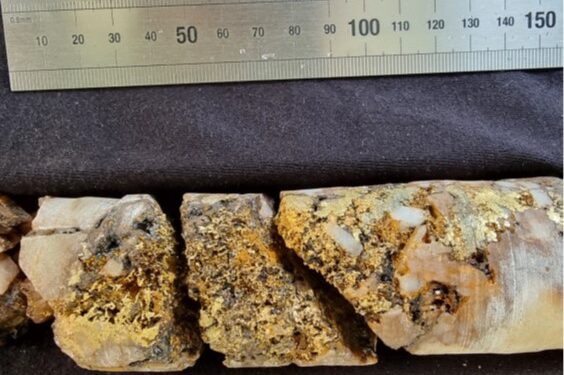 A hand-held core drill, able to core 40mm diameter drill core, was utilised to drill two vertical hole adjacent to and beneath the visible gold observed at surface.

The two holes (A and B) were drilled approximately 1.5m apart, along strike and to a depth of approximately 50 centimetres and 23 centimetres respectively. Recoveries were 95% for Core A and 100% for Core B with Core A drilled on the west side of Core B.

The Peninsula Prospect (E52/3850), part of the Newman Gold Project, identified by stream sediment and soil sampling in 2021 has confirmed the presence of several, possibly stacked north-westerly trending gold in soil anomalies.

The prospect is dominated by skeletal soil and spinifex cover with outcrop predominately limited to creek systems or a dominant quartz-ironstone vein which transect the prospect.

The largest quartz-ironstone breccia vein mapped at the Peninsula prospect is located in the northern portion of the prospect and can be traced over a strike length of approximately 400 metres, trends approximately northwest-southeast, has an approximate true thickness of 4.0 metres and has a moderate dip of approximately 50 degrees to the northeast.

Wall rock silicification of a possible fine-grained sediment up to a metre wide on both the hanging and footwall was observed. A close inspection of this vein in the main creek at the Peninsula prospect has identified visible gold over an approximately 2 metre x 3 metre area on the surface of the vein.

A horizontal quartz-ironstone-gold stringer was observed within the hanging wall silicified sediment.

“’It is very rare for a green field exploration programme in WA to encounter mineralisation of this nature sitting undisturbed at surface,” Technical Director George Merhi said.

“In addition to being a very impressive demonstration of the high-grade potential of this system it also highlights just how underexplored the area is.

“Peninsula and the other Newman prospects due to be drilled have been uncovered as a result of systematic exploration over a small portion of our overall project area.

“In 2022 we have expanded this effort and look forward to updating the market on potentially new discoveries in this exciting district.”