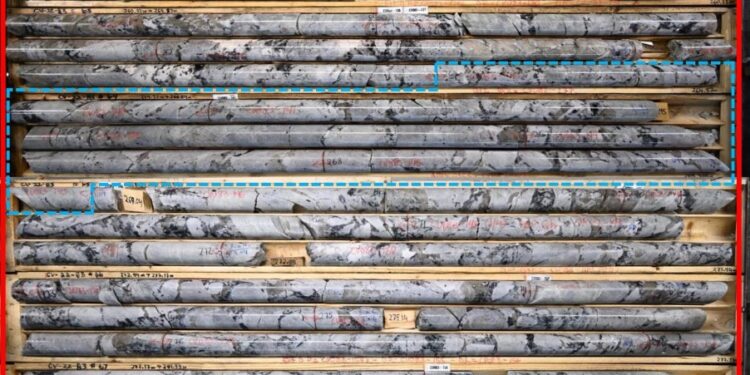 The primary drill area is focused at the CV5 Pegmatite, located approximately 13.5km south of the regional and all-weather Trans-Taiga Road and powerline infrastructure.

• Drill hole CV22-083 continues to extend mineralization eastwardly at the CV5 Pegmatite, and is interpreted to have intersected part of a large, high-grade ‘zone’ within the overall pegmatite that now has been defined by several drill holes, including CV22-017, 042, 066, and 083 over a strike length of at least 250m

• The spodumene mineralization at the CV5 Pegmatite has been traced over a strike length of at least 2,200m through the 2021 and 2022 drill programmes. The mineralization remains open along strike at both ends and to depth along most of the pegmatite’s length

“It is hard to find words to adequately describe the impressive nature of the lithium mineralization in drill hole CV22-083,” Darren Smith, Vice President of Exploration, said.

“Visual estimates of spodumene abundance may give you a sense, but assays are the true measure and have certainly astounded with this hole. As we move east, we are defining a significant high-grade zone at a coarse drill spacing of 50m to 100m.

“The recently commenced winter drill programme will continue to probe and delineate this area ahead of an initial mineral resource estimate planned for the first half of 2023. Drill hole CV22-083 has raised the bar ever higher with respect to the considerable potential at CV5 as we continue to delineate it, and by extension, the rest of the CV lithium district held by the Company that has yet to be drill tested.”

The 2022 drill campaign at Corvette has significantly expanded lithium mineralization at the CV5 Pegmatite. The drilling to date has largely been completed at approximately 100m spacing (down to ~50m in some places) with the principal spodumene pegmatite body (CV5), flanked by several secondary lenses, currently traced by drilling over a distance of at least 2,200m, remaining open along strike at both ends and to depth along most of its length.