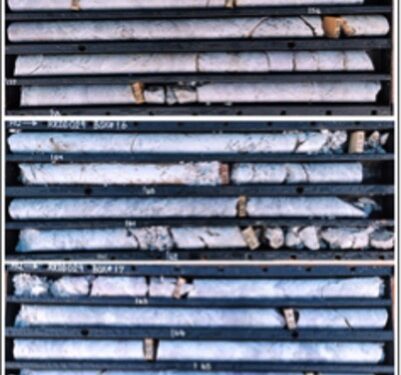 Drilling Continues To Intersect Dykes And Vein Swarms In Thailand

“Drilling continues to meet expectations and in hole RKDD031 has exceeded expectations as a second unexpected pegmatite of considerable width was intersected at depth,” Mr Lock said.

“We are rapidly progressing to a Mineral Resource and we are targeting the delivery of a Scoping Study in the first quarter of calendar year 2022.

“Our aim at the Reung Kiet Lithium Project is to deliver a Mineral Resource which is sufficient to operate a 10,000 tonne per annum lithium hydroxide or lithium carbonate plant for 10 plus years, initially.

“Peer feasibility studies suggest that lepidolite is the lowest cost source of lithium and potentially has one of the lowest carbon footprints, until recently this is why we have been solely focusing on lepidolite style projects, but our Kata Thong Geothermal Li and Hard Rock Li/Sn Project has the potential to deliver equally compelling cost and emissions outcomes.

“Being located in South East Asia provides the added advantage of our proximity to all required process inputs and a myriad of established and emerging lithium chemical consumers.”

The Reung Kiet Lithium Project (RKLP) is one of two key lithium assets held by PAM, the other being the Kata Thong Geothermal Li and Hard Rock Li/Sn Project.

RKLP is a hard rock lithium project with lithium hosted in lepidolite/mica rich pegmatites chiefly composed of quartz, albite, lepidolite and muscovite, with minor cassiterite and tantalite as well as other accessory minerals including some rare earths.

Previous open pit mining extracting tin from the weathered pegmatites was conducted into the early 1970’s. PAM’s objective is to continue drilling with the aim of reporting a Mineral Resource in accordance with the JORC Code 2012.

The Mineral Resource will be used as part of a Scoping Study that plans to consider initial production of up to 10,000tpa of LCE and associated by-products. PAM is focusing on lepidolite as a source of lithium as peer group studies indicate that lithium carbonate and lithium hydroxide projects using lepidolite as their plant feedstock have the potential to be placed at the bottom of the cost curve have also been demonstrated to have a lower carbon emission intensity than other lithium sources.

The RK Prospect was a relatively large open cut tin mine. The old pit is about 500m long and up to 125m wide.

Mining of the weathered pegmatites extended up to 25m below surface, to the top of hard rock. Pan Asia has identified a prospective zone at least 1km long in association with extensive surface indications of lithium in trenching, rock-chips and soil anomalies, which are now supported by drilling results along the whole of the trend.

Lithium mineralisation remains open to the north and south and at depth on many sections.

Pan Asia Metals has now completed 31 diamond core drill holes at RK for a total of 4,344m. Drilling is ongoing with holes RKDD026-031 now completed and being reported in this announcement.

The holes are currently being logged and sampled. Assay results should be available in October.