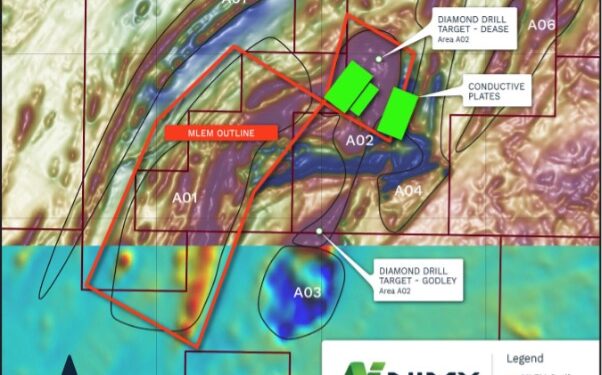 The plates are located at target Zone A within Area A02 – Dease. In light of these strong results, the MLEM survey has been expanded to cover a larger area of prospective ground along strike.

The identification of conductor plates using the proven MLEM technique is a significant result along the path to locating higher-grade disseminated and massive sulphide nickel zones.

Earlier RC drilling by Nimy has identified nickel sulphides in Zone A. The presence of conductive plates shows that there are likely to be areas of higher grade.

A soil geochemical signature of the ground above each plate will help determine the order in which the new targets will be drilled. The current diamond drilling programme will be adjusted to prioritise the new targets.

The MLEM survey has covered about 5 per cent of the current identified strike length at Mons. Based on this early success, the Company will undertake a large-scale V-TEM aerial survey over the tenement to the north to find early electro-magnetic identifiers for future MLEM surveys to cover.

The strategy enables a continuous and stepped exploration approach to efficiently test such a large prospective tenement holding.

Diamond drilling on the Godley target is currently underway, with the first hole completed on Friday 4th February. Drilling of the second hole at Godley commenced on Saturday 5th February.

On completion of this hole, the diamond rig will move north to test the MLEM conductor plates identified within this announcement at Dease target.