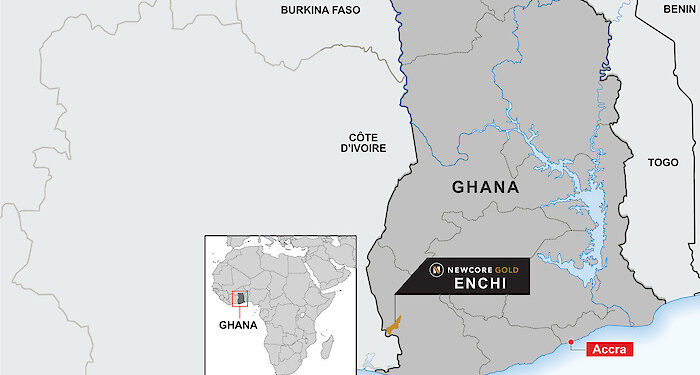 Reverse Circulation (RC) drilling on the southern end of the Sewum Gold Deposit at Enchi has intersected shallow high-grade oxide gold mineralisation grading 1.98 grams per tonne gold (g/t Au) over 25.0 m from 3.0 m, as well as high-grade results in deeper sulphide mineralisation including 2.14 g/t Au over 18.0 m from 123 m.

Highlights from Drilling at Sewum and Eradi

RC drilling at the southern end of the Sewum Gold Deposit (also referred to as Sewum Extension) intersected near surface oxidized gold mineralisation:

Eradi is a previously drilled target at Enchi with no defined Mineral Resource Estimate. The zone has been tested at wide spacings over a strike length of 1.6 kilometres and remains open along strike and to depth.

“These results include drilling completed on the southern end of the Sewum Gold Deposit which has extended the gold mineralisation up and down dip, encountering high-grade gold in both near-surface oxides as well as in the deeper sulphides,” President and CEO, Luke Alexander, said.

“We also completed first pass drilling on a parallel structure at Sewum, situated outside of the current pit constrained mineral resource, which encountered high-grade mineralisation near-surface.

“In addition to testing the potential for resource growth at our existing deposit areas, the ongoing 90,000 m drill programme at Enchi is also focused on testing previously drilled areas on the property.

“Drilling at the Eradi target, which is situated on the northern end of the property, intersected widespread gold mineralisation over more than 1.1 kilometres of strike length.
“We continue to encounter high-grade gold results across our Project in Ghana, highlighting the resource growth potential at Enchi which is situated on a prolific gold belt that hosts numerous multi-million-ounce gold mines.”