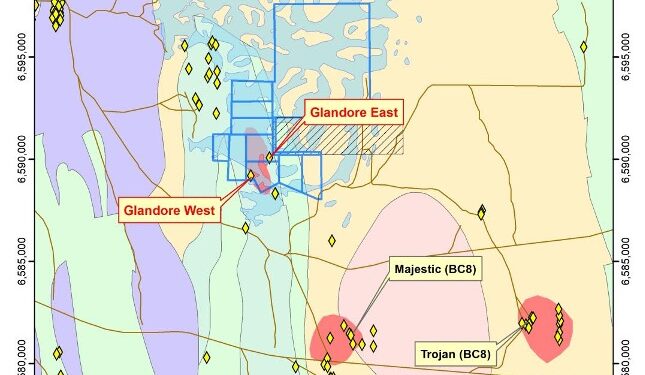 The company previously reported, GDDD002 intersected coarse visible gold within a quartz vein in altered granodiorite. As a result of the coarse gold, repeat assays from the above interval returned individual results as high as 0.4m @ 11.28g/t Au.

Miramar’s drilling has now confirmed the presence of high-grade gold mineralisation over a strike length of approximately 90m, with the mineralisation remaining open along strike and at depth.

Miramar advises that it has also recently completed a detailed UAV magnetic survey over the Glandore Project, including the Glandore East target.

The survey was flown with east-west flight lines spaced at 25m intervals, and a sensor height of 25m.

The new survey, completed by Pegasus Airborne Systems, has provided a significantly improved level of detail, highlighted multiple NE-trending structures crosscutting the granodiorite intrusion and provided much greater resolution of the eastern contact of the granodiorite with the mafic rocks.

Miramar’s Executive Chairman, Allan Kelly, said the company continued to be excited about the potential of the Glandore East target.

“With each new diamond hole, we see substantial alteration and/or sulphide mineralisation and eagerly look forward to receiving the gold results,” he said.