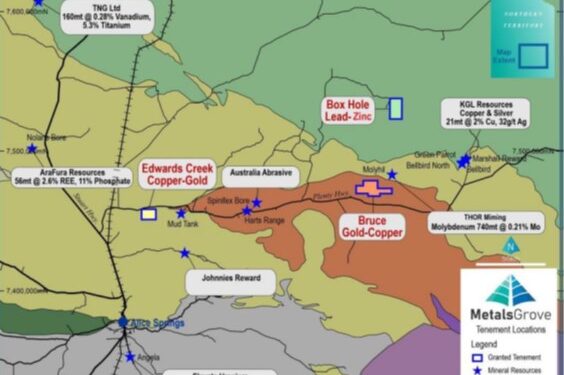 The Bruce Prospect is considered prospective for Rare Earth, Copper-Gold and LCT pegmatite mineralisation and is located within the broader Arunta Project ~300 km by road from Alice Springs and 13 km north of the Plenty Highway.

During 2017-18 Northern Territory Geological Survey (NTGS) completed airborne electromagnetics survey at Bruce and the survey data was collected and re-processed by MetalsGrove. Following a detailed review, MetalsGrove has identified a broad conductor along strike from the Plenty River mine which is adjacent to magnetic features interpreted to be components of the pegmatite intrusion. The broad conductor has not been tested to date.

Additional exploration to be completed with the Arunta Project area this quarter includes 1,147-line kilometres of airborne magnetic and radiometric survey at the Box Hole Prospect with 50m spacing on north-south traverse line direction.

“We are delighted with the results from our review of historic data, as it has confirmed the strong potential of the Bruce Prospect and defined a significant new area of interest for our upcoming exploration programmes,” Managing Director, Sean Sivasamy, said.

“The broader Arunta Project is a highly mineralised region which has already demonstrated the potential to host Rare Earth, Copper-Gold and LCT mineralisation.

“This technical review provides our team with a great foundation to launch our 2022 exploration campaign and as a result we are building a very targeted programme to be carried out across this area over the coming months.

“I look forward to providing regular updates on our exploration advances over the coming weeks at this exciting time for MetalsGrove.”