Metallica To Rock On At Starr Gold-Silver Project

Metallica To Rock On At Starr Gold-Silver Project 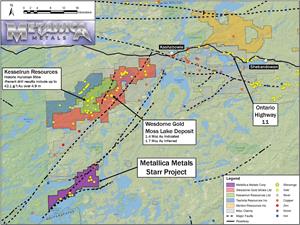 The project, which the company has the right to earn up to a 100% interest, covers a large land position of 5,991 hectares that includes several high-grade gold and silver occurrences within a 20 km long segment of the southwestern section of the Shebandowan Greenstone Belt in the Thunder Bay Mining District of Ontario.

It is accessible year-round by highway and logging roads and is located in close proximity to the Moss Lake gold deposit owned by Wesdome Gold Mines Ltd. and the Huronian Gold Property owned by Kesselrun Resources Ltd.

The Lakeshore Showing was discovered in 1934 and worked sporadically by companies. It is approximately 25 cm in width and striking N90E, which contains minor pyrite along with gold-silver tellurides. A 423 kg bulk sample was collected in 1999 from selectively sampled high grade vein material and returned a weighted average grade of 356.3 g/t Au and 850 g/t Ag.

In addition, limited diamond drilling was completed on the Lakeshore Showing in 1999 with one drilling intercept encountering 25.5 g/t Au and 92.0 g/t Ag over 1.1m near surface. No follow-up drilling has been completed since.

The Starr Zone was discovered in 1991 by Wye Resources. Significant exploration work has been completed since then including ground magnetic and induced polarization (IP) surveys, geological mapping, trenching, channel sampling, and diamond drilling. Significant drilling intercepts include 5.69 g/t Au over 20m and 5.51 g/t Au over 8.2m. No follow-up drilling has been completed since.

The Powell Zone was discovered in 1934. Numerous exploration programmes have been completed since then including stripping, mapping, channel sampling, ground and airborne geophysics, and diamond drilling. A gold-bearing quartz vein striking 40-55 degrees, varying in width from 0.9 to 6 m, has been exposed over a strike length of 121m.

The company also plans to complete a high-resolution airborne EM survey over the entire Starr project area to generate new exploration and drilling targets and enhance the company’s knowledge of the structural geology on the Project.

Exploration is expected to commence in the northern spring and summer of 2021.

De Grey Gold Targets Light Up At Scooby And Antwerp