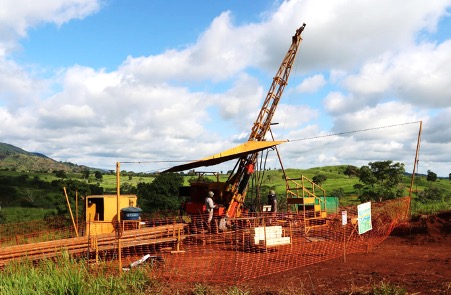 Meridian Mining UK S (TSX:MNO) has discovered a significant new gold-silver system at the C4-A prospect, two km southeast of the Cabaçal Mine in Brazil.

Three surface drill rigs and four drill crews are currently confirming, infilling, and expanding the extensive near-surface copper-gold mineralisation of the Cabaçal Mine.

“I congratulate the geology team on their discovery of a new bedrock precious metal system at C4-A, two km to the southeast of Cabaçal, and ongoing positive results from the Cabaçal drill programme. This discovery highlights Cabaçal’s incredible potential to continue to build, not only via historical targets but from new discoveries in this under-explored greenstone belt,” CEO and President, Dr Adrian McArthur, said

This gold-silver discovery is part of a larger 3.5km trend that hosts multiple gold in-soil anomalies with coincident IP anomalies. Meridian is evaluating the possibility that this new system within the Mine Corridor trend is precious metal dominant. This discovery opens an entirely new resource development prospect for the Cabaçal project and is only 2km southeast of the Cabaçal Mine, reflecting the Project’s upside and scalability.

Infill-drilling has confirmed and extends thick layers of strong copper-gold mineralisation into an area sparsely covered by historical drilling. The ECZ is the shallowest part of the Cabaçal Mine area with its northeastern limb extending to surface.

Drilling within the CCZ has returned further wide layers of copper-gold mineralisation with CD-115’s 50.6m @ 0.9% CuEq, including an open northwesterly trending extension of the gold overprint assaying 41.3 g/t Au (ID CBDS15175) over 0.35m.

Drilling along the CNWE’s southwestern limb is confirming an open zone of strong copper-gold-silver-zinc mineralisation with a gold overprint. Recent drilling activity by CD-141 and CD-143 (assays pending) has intersected strong zones of sulphides, with CD-143 coring a steep vein with visible gold, 325m northwest of the limit of mine development, continuing to highlight the potential for higher grade mineralisation that was missed with the vertical drilling. Assays are pending. T

he southwest side of the CNWE is considered open. The results of a recent soil program has extended the CNWE prospective area a further 300m and now stands at 1250m; the trend is open and is limited by a landowners boundary.