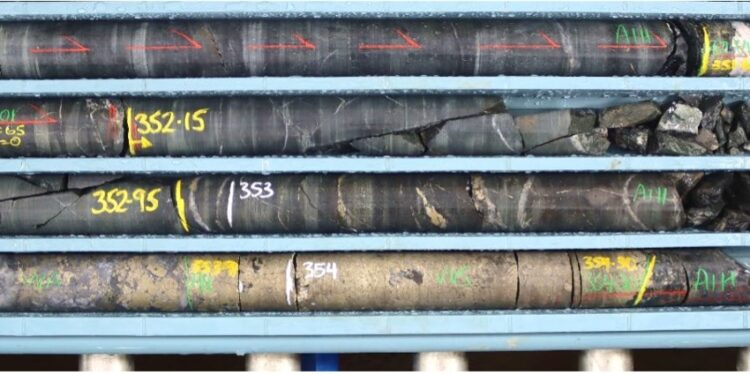 “Exciting high-grade results like these continue to build confidence at Flag. These results, combined with previous drilling and historical underground mapping gives us great confidence the deposit can be mined successfully from underground,” Managing Director, Paul Bennett, said.

“Importantly, the structure remains open with the possibility of further extensions from follow up drilling currently being planned.”

The Flag deposit is currently the southern most Au-Cu deposit delineated at KMC and in the Ravensthorpe Greenstone Belt. Mineralisation outcrops in the greenstones proximal to the overlying unconformable contact with the Proterozoic Mt Barren Group metasediments. Flag dips moderately to steeply to the south beneath these Proterozoic rocks.

All the mineralisation bearing structures identified at Flag are open at depth and along strike to the east and west.

Flag is noteworthy for its consistent planar structure that strikes west-east over at least 550m, with the regular nature of the structure enabling it to be mined from underground on an intermittent basis from the early 1900s to 1989.

Flag is also notable for its high grades of gold and copper, as evidenced by drill results and the available historical face mapping and sampling results. Medallion’s 2022 assay results provide further confidence that the high grades observed are a consistent feature at Flag.

The diamond tail DD22KP1138 to the RC pre-collar (previously RC22KP1138) was completed in November 2022. Drilling intersected the Flag Main Lode consisting of grey smokey quartz – pyrite (10%) and chalcopyrite (2%) at the contact between a dolerite and agglomerate unit. The Flag fault cross lode was intersected in the footwall to the Main Lode with higher sulphide content of pyrite (15%) and chalcopyrite (20%).

Assay results from the veins include:

Resources at the Flag deposit.

The Flag Main lode intersection confirmed the high-grade SE plunge to the Main Lode and is situated approximately 35m down-dip of RC22KP1137 and 65m DD22KP1128 up-dip of DD22KP1128, previously announced by Medallion on 18 October 2022;

Medallion completed approximately 8,000m of new drilling at KMC in the latter stages of 2022, targeting extensions to established Mineral Resources at Gem, Harbour View and Flag in addition to priority near mine targets. All drilling has been sampled and despatched to the laboratory for assay.

Medallion has now completed approximately 54,000m of combined RC and DDH drilling at RGP since listing on the ASX in March 2021. Approximately 50,000m has been carried out at KMC with the remainder completed at the company’s highly prospective regional targets.

In June 2022, Medallion released an interim MRE update comprising approximately 26,000m of new drilling with KMC Mineral Resources increasing to 1.4Moz AuEq @2.6g/t. Approximately 23,000m of drilling has been completed subsequent to the MRE update which will contribute to further MRE growth in the future.

The next MRE update based on between 12,000m and 15,000m of drilling will be released in February 2023 and will form the basis of a Pre-Feasibility Study to be completed in the first half of this calendar year.