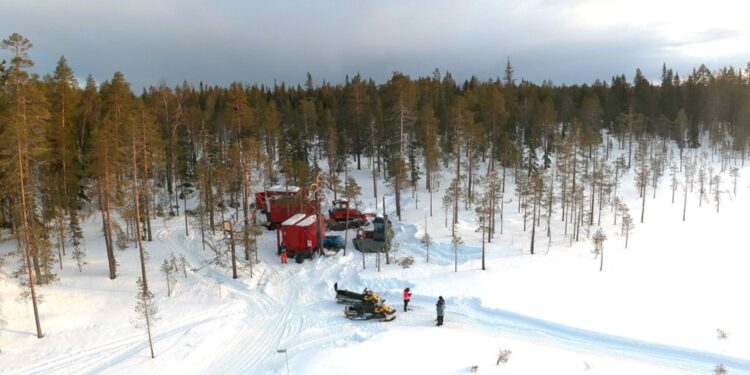 Mawson Gold Limited (TSX:MAW) has intersected high-grade gold in the maiden drill programme at the Skellefteå North project in Sweden.

The first two drillholes (DB2201- DB2202), reported here, both intersected significant near surface gold. Drilling of the final hole of the six hole programme, which to date has drilled five holes for 591 m, should be completed in the following week. Logging and assay of the unreported drilling metres is currently in progress.

“To intersect these grades from near surface, in a premier mining district is a very exciting outcome,” CEO, Ivan Fairhall, said.

“Given that these are the first drill holes ever into the project market, these results increases their significance considerably. This once again demonstrates the ability of Mawson’s team to find, acquire and explore high quality gold projects within well-known mining jurisdictions.

“Skellefteå North is located in the shadow of the headframe of a number of significant gold mines where >6Moz of gold have been produced from four mines within 22 km of the project. These results further highlight the fertility of the Skellefte belt. They also bode very well for the remainder of our drill programme, which is initially focusing on testing the 180 m strike of mineralised outcrop and then extend beyond to where mineralization is interpreted to continue under cover, in association with a two km long, approximately NW-SE trending magnetic anomaly.

“Mawson is concurrently focused on its PEA work programne for Rajapalot in Finland, and benefits from a strong ASX market response to the extremely encouraging Sunday Creek drilling by Southern Cross Gold Ltd in the Victoria Gold Fields of Australia, a company 60% owned by Mawson.”

The drillholes reported here were collared located in the southern-central portion of the Skellefteå Project at the Dalbacka prospect where a 180 m long gold-mineralised outcrop of mafic-dyke was recently discovered. The dyke intrudes into a Paleoproterozoic, pyrrhotite-bearing, graphitic black-shale succession. A two km long, approximately NW-SE trending magnetic anomaly is coincident with this black-shale host-succession, and is interpreted as the continuation of the mineralised trend along strike, but under thin glacial-cover.

Five continuous, gold-bearing channel samples taken across the mineralised-dyke were reported by Mawson on January 17, 2022, with best results of 3.8 m @ 4.5 g/t Au, and 1.6 m @ 5.4 g/t Au. Gold-mineralisation is contained within an arsenopyrite-bearing, sheeted-quartz-vein system confined to within the limits of the steep south-westerly dipping mafic-dyke system.

The maiden drill programme at the Skellefteå Project was focused on testing down-dip extensions of the mineralised-dyke system at Dalbacka. Drillholes DB2201 & DB2202, collared on the same section approximately 45 metres apart, were designed to test the down-dip continuity of the eastern portion of the channel sampled mineralised-dyke. These holes successfully intercepted the mineralised host, returning results of 4.4 m @ 4.8 g/t Au, and 1.8 m @ 28.4 g/t, respectively.

Visual observation of the mineralised intercepts confirms gold is intimately related to the arsenopyrite-bearing, sheeted-quartz-vein system hosted within the dyke. Visible gold occurs within individual quartz veins and also within the wall-rock, which similarly shows elevated arsenopyrite with quartz.

Drill holes DB2203, DB2204 & DB2205 were designed to target the down-dip extensions of the central and eastern portions of the mineralised outcrop.

An additional drill hole DB2206 was added during the programme ~180 m further north-west of the mineralised outcrop to explore for both down-dip, and along-strike continuation of the gold-bearing dyke system.

The Skellefteå North Gold Project consists of 2,500 ha of contiguous 100%-owned claims located in the well-endowed Skellefte Mining District of Northern Sweden, located 40 km north-northwest of the city of Skellefteå and 750 km north of Stockholm, Sweden. The area has a long history of mining and strong economic ties to the industry.

Developed infrastructure includes railway and paved highways connecting the community to all of Sweden.

Low cost hydropower and a skilled labour force further support the industry. The climate in this area of northern Sweden is moderated by the Gulf Stream and is very similar to Timmins, Ontario.

Mawson has the right to earn up to 85% of the project and enter into a joint venture through phased spending and work commitments.