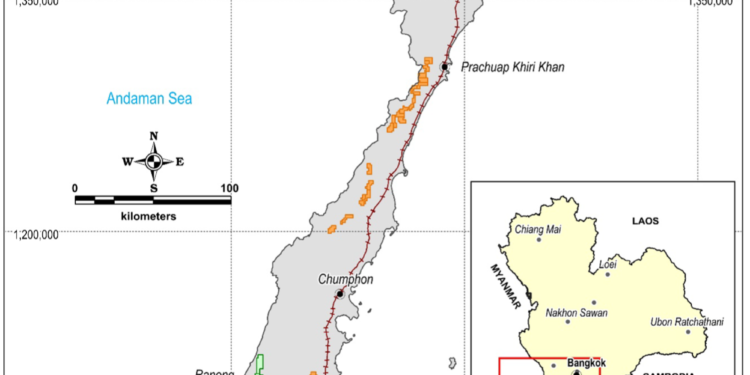 The SPLAs cover ground known by Thailand’s Department of Minerals and Resources to host lithium occurrences.

Matsa has a fully functional office, staff and skills in the country and is well positioned to actively grow its portfolio.

The company is ramping up its activities in Thailand because there have been a number of significant recent developments which strongly encourage mineral exploration, including:

• Exploration successes announced by PAM in regard to its lithium projects

The SPLAs are located in the western granite belt, which extends over ~800km along Thailand’s western border with Myanmar and Malaysia.

This belt has historically been a prolific source of tin. The new lithium tenements have been selected using at least two of the following criteria:

1 lying within the Western granite/pegmatite belt

2 being either contiguous or in close proximity to PAM’s licences where recent drilling produced drilling intersections of up to 1.44% Li20

4 recorded occurrences of tin, tungsten or tantalum Prior to these new applications, the company discovered and explored a number of significant copper targets (Siam 1, Siam 2 and Chang 1 projects) prior to scaling back activities in 2016 due to low political support for mining and exploration activities.  These projects have all been retained under SPLA/EPLAs due to their strong potential.

Chairman, Paul Poli, said Matsa will build upon past exploration in the country and seek to establish a strategic landholding targeting lithium, copper, lead, zinc, silver and gold in Thailand’s rich metalliferous and geological setting.

“Thailand has always been a place of special interest to Matsa and we always understood its excellent geological prospectivity, but had to be patient whilst the country matured their mining legislation and consent processes,” Mr Polis said.

“We have observed substantial progress in this area over the last six months and authorities have now been positively engaging with miners. This is clearly evident through Kingsgate recommencing mining at their Chatree Gold Mine and even further afield, the success of Pan Asia with their lithium discoveries.

“Matsa sees enormous opportunities in exploration for lithium, gold and base metals, not only because of the highly prospective geology, but also the economic ramifications of Thailand’s close location to China.

“The two countries are now directly linked by rail which could have positive economic benefits to any mine development within the region. I see Thailand as an emerging mining frontier where tier one discoveries are bound to be made and with the change of attitude to mining it will be a great exploration destination.

“Matsa intends to use some of the funds from the recently announced $20M sale of Red October and Devon to advance the projects.”

Gold 50 Kicks Off Drilling At Spitfire Project In Nevada