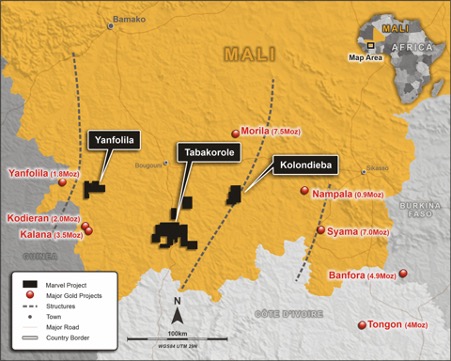 Marvel Gold Limited (ASX: MVL) has identified multiple north-south trending structures with results of the high-resolution Gradient Array Induced Polarisation (GAIP) geophysical survey which was completed at the Kolondieba Gold Project in south-east Mali. Kolondieba is held under a joint venture with B2Gold Corporation in which Marvel holds an 80% interest.

“We are pleased with the results of the Gradient Array IP survey at Kolondieba which have worked very well to map the underlying lithology and structure and give further context to our highly anomalous auger drilling results,” Managing Director, Chris van Wijk, said.

“The survey has highlighted a strong north-south oriented structural fabric which was not evident in the magnetics.

“A number of geophysical anomalies have been defined which correlate well with the auger results and require follow-up work. Kolondieba is a strategic project for Marvel being located approximately 60km north-east of Tabakorole, which hosts an existing mineral resource of one million ounces and also proximal to the Morila mine.”

Three targets were selected for follow-up with GAIP based on the results of auger drilling carried out earlier in 2022.

Target 1 – this is the southernmost target where six auger holes recorded results of 1.0 g/t Au and 29 holes returned over 100ppb Au, with a best result of 2.35g/t, which is extremely anomalous. The GAIP results show anomalous gold values oriented in a north- south direction, coincident with the underlying structural fabric evident in the GAIP. This is interpreted to be a north-south trending second order shear system emanating from the Bannifin shear zone which is located a short distance to the south-east. The main gold anomalous zone has a strike length of approximately one km with a width between auger holes of up to 200m.

Target 2 – this is the central most target and shows a similar north-south trending structural fabric in the underlying geology which is similarly interpreted to be a series of north-south trending splays emanating from the Bannifin Shear-Zone (BSZ). Strong mineralisation at this target was only encountered on the central line and this appears on a structure that is not well tested by the auger lines to the north and south and requires further work to understand the true extents of the target.

Target 3 – shows a very strong north-south trending feature which is highly conductive and encapsulates most of the anomalous gold in auger values. In common with Targets 1 and 2, this is interpreted as a splay off the BSZ with the conductivity being explained by conductive clays within the shear zone. This also suggests that the low chargeability represents a zone of deeper weathering over the shear zone that has oxidised any sulphides which were initially present. Eight auger lines were drilled over this target with each auger line encountering anomalous gold and with a peak value of 1.54g/t Au.