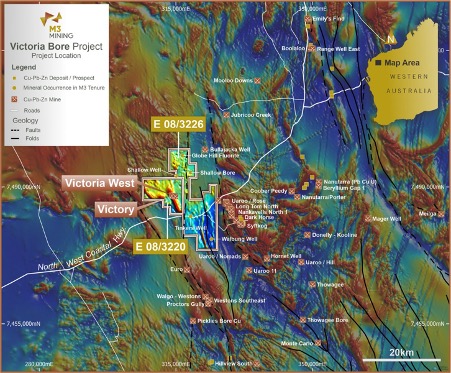 The three-hole programme tested strong EM conductors along strike from the high-grade historic copper occurrence at Victoria Bore. It is considered the drill holes intercepted the mineralised sequence but only returned mildly anomalous base metal values

• Graphitic shale units intercepted by the drilling are considered to be the source of the strong EM conductors. Assaying confirmed the Total Graphitic Carbon (TGC) content as follows:

• Following the receipt of drilling results and the recent high resolution aeromagnetic and radiometric survey data a full project review is now being undertaken by a specialist consultant group to assess the Victoria Bore mineralized trend as well as to generate new regional targets.

“The drilling programme completed in October identified graphitic shale units to be the source of the geophysical targets. In addition, trace occurrences of copper, silver, nickel, zinc and lead were intersected in all holes which expands the base metal halo that surrounds the historic mine,” Executive Director, Simon Eley, said.

“The continued base metal mineralization being intercepted at Victoria Bore is still yet to be explained by a succinct theoretical model. The Company is awaiting analysis from a consulting group to provide further understanding on the source of the previously mined high-grade copper at Victoria Bore. The group are also reviewing the aeromagnetic and radiometric data recently obtained which will provide us with priority regional targets across the companies 33,000 ha tenure.

“The company is currently investigating the properties of the graphite at Victoria Bore and will update the market in due course.”