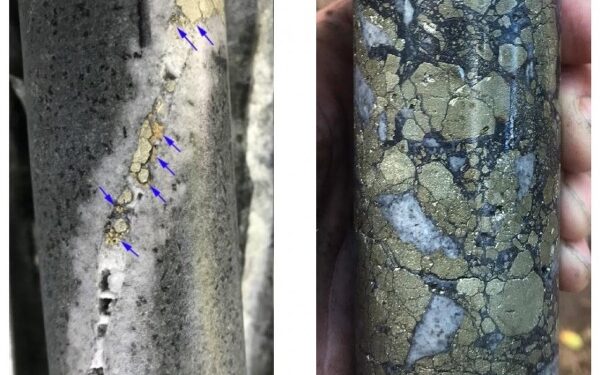 Evidence is growing that this deep NE-oriented structure is nearly vertical, with a strike length of at least 360m, and vertical extent of at least 720m from surface. It is believed to be an extension of the high grade UR4 lode, open both at depth and along strike where it projects from the Tuvatu resource area to the Banana Creek target 3.5km to the NE.

Dr Quinton Hennigh, technical advisor to Lion One, said the company this deep intercept from TUDDH533 to be part of the same important structure as TUDDH500 with both intercepts displaying strong visual similarities including coarse pyrite and visible gold in gray silica within centimetric-scale veins with distinct light gray potassium feldspar alteration halos around the veins.

Such flat lodes, known as the SKL group, are common higher up at Tuvatu. If this intercept is indeed from a flat lode, it would be the deepest known flat lode at Tuvatu. Lion One believes that the ore-forming fluids that generated the high-grade feeder discussed above may have found their way into nearby fractures thus forming lodes similar to those seen in the SKL group.

“The deep high-grade intercept encountered in hole TUDDH533 is almost certainly from the same high-grade structure encountered in hole TUDDH500 late last July,” commented Dr. “Visual appearances of these two intercepts are strikingly similar. We are now growing comfortable with the idea that this is a northeast-trending, near vertical lode, likely the down-dip and strike continuation of the UR4 lode,” Dr Hennigh said.

“This is very exciting, because this lode remains open to the northeast and at depth. In fact, this lode projects toward the Banana Creek target approximately 3.5km to the northeast from Tuvatu. It is intriguing to think that the UR4 structure might be a main mineralising conduit that could tie together the bigger gold system within the Navilawa caldera. Lion One has several deep drill holes planned at Banana Creek this drill season.”